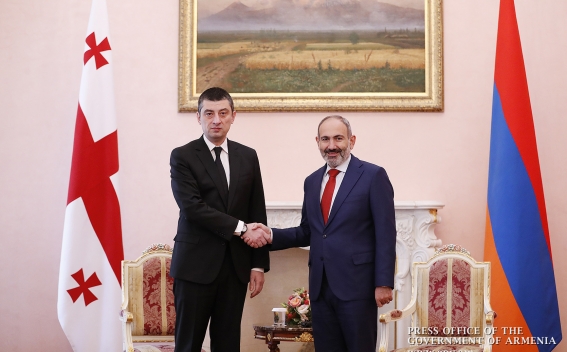 Prime Minister of Georgia Giorgi Gakharia has arrived in Armenia on official visit at the invitation of Prime Minister Nikol Pashinyan. After the official welcoming ceremony, the two Prime Ministers held private talks, followed by an expanded-format meeting.

“Honorable Mr. Prime Minister, dear Mr. Gakharia, I am pleased to welcome you to Yerevan in your capacity of prime minister of the brotherly Georgian people. I am happy that before our meeting we have already managed to establish warm and working relations. It is important to note: we are both convinced that the relations of our countries will improve as a result of today’s negotiations. If I were to be asked what the achievements of my one and a half year premiership are, I would first of all mention the development of new level of relations with Georgia. At the same time, I am convinced that our joint efforts will result in closer cooperation between the two countries. Welcome, Mr. Prime Minister,” Prime Minister Pashinyan told his Georgian counterpart.

“Honorable Mr. Prime Minister, dear Nikol, thank you for the warm welcome. It is a great honor for me to be in Armenia on official visit. We have a great responsibility before our ancestors who have laid the foundation of an everlasting friendship between our countries and nations.

I would like to assure that relations will continue to expand with the implementation of our reciprocated commitments, which will affect our citizens as well. Despite our high assessment of bilateral relations, we have good opportunities to develop exchanges in the economy, culture and other sectors. Thank you once again for the warm welcome,” Prime Minister Gakharia said.

During their private meeting, the two prime ministers addressed a number of items on the agenda of the Armenian-Georgian relations, including the expansion of trade and economic ties and the development of cooperation in different sectors of the economy.

At the expanded meeting, Prime Minister Pashinyan advised that a broad range of issues had been discussed during the tête-à-tête interview. “The most important result is as follows: we are eager to record ever new achievements in interstate relations and build a strategic development vision,” the Armenian Premier said.

Describing the private meeting as quite effective, Prime Minister Gakharia said: “It affects the traditional values of our two countries and peoples.” He stressed that the situation in the region calls for adequate reaction, and stability will only contribute to the productivity of regional cooperation.

A broad circle of issues related to the Armenian-Georgian cooperation in transportation, commercial-economic ties, agriculture and culture were discussed. The prime ministers attached importance to transport communications development prospects. Nikol Pashinyan and Giorgi Gakharia expressed conviction that economic cooperation might boost the growth in trade turnover. In this context, they highlighted the activities of the Armenian-Georgian intergovernmental commission and hailed the latest session’s results.

The Prime Ministers attached importance to the ongoing infrastructure projects, namely the reconstruction of Gogavan-Guguti and Bavra-Ninotsminda roads.