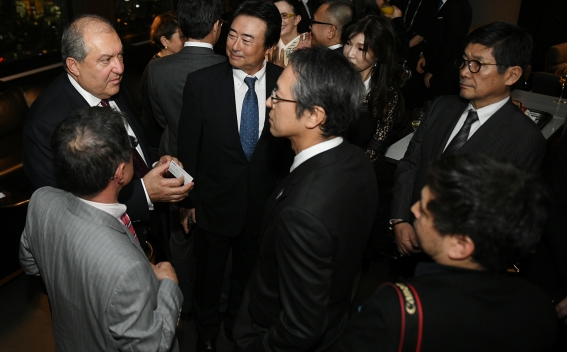 President of Armenia Armen Sarkissian held a meeting with Japanese businessmen within the framework of his visit to Tokyo, Armenpress reports.

Sarkissian presented Armenia’s investment and competitive opportunities to the entrepreneurs, stressing that the country is open for cooperation.

He said that being an EAEU member and closely cooperating with the EU, Armenia creates good possibilities for businessmen and can serve as a bridge for entering other markets.

“This is an era of high technology, mathematical modelling and artificial intelligence. It isn’t mandatory to have natural resources to be successful, human mind and skills are enough to be successful,” the president said.

“Armenia is a country with a people having high level of education. Armenia is open for the world and I hope that we will have serious cooperation with Japan and Japanese companies,” he added.

The president said he is ready to maximally support the companies who are interested in cooperating with Armenia.

“We hope to see more Japanese companies in Armenia soon, as well as Armenian businesses here [in Japan],” he said.