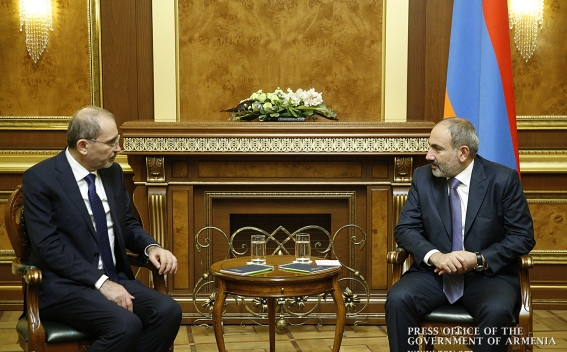 Welcoming the Jordanian Minister’s visit to Armenia, Nikol Pashinyan said it would give new impetus and energy to the friendly relations between the two countries. Evoking the historically deeply rooted bonds between the two nations, Nikol Pashinyan noted that the Government of Armenia is eager to develop multifaceted relationship with Jordan. The Premier highlighted the furtherance of economic exchanges through joint investment projects in the fields of IT, tourism and healthcare.

Thankful for the warm welcome, Ayman Al Safadi said his country, too, is keen to develop and expand the scope of relations with Armenia. The Jordanian Minister expressed confidence that the fruitful meetings held in Armenia would add momentum to bilateral relations. In this context, the interlocutors stressed the importance of reciprocated high-level visits in the furtherance of interaction between the two countries.

Taking the opportunity, Nikol Pashinyan and Ayman Al Safadi referred to issues of regional relevance, highlighting the maintenance of stability and security in the region, as well as the peaceful settlement of conflicts.

The Armenian Prime Minister thanked the Government of Jordan for its balanced position on the Nagorno-Karabakh conflict settlement process. Prime Minister Pashinyan considered it inadmissible to attribute a religious bias to the conflict and present it as such on international platforms. Concurring with Nikol Pashinyan’s remarks, Ayman Al Safadi prioritized the peaceful resolution of the Nagorno-Karabakh conflict.