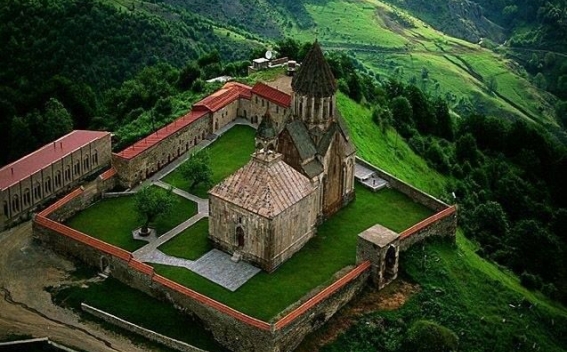 Gandzasar Monastery is perhaps the most prominent architectural monument of Artsakh, which for a long time has been a symbol of Armenian statehood in Artsakh Republic.

The 13th-century Armenian Apostolic cathedral is located near the village of Vank in Martakert region. It has historically been the region's most important church. One of the best pieces of Armenian architecture of the mid-1200s, the building is best known among scholars for its richly decorated dome.

The name Gandzasar, which means "treasure mountain" in Armenian, is believed to have originated from the tradition that the monastery was built on a hill containing ores of silver and other metals.The site was first mentioned in written records by the tenth century Catholicos Anania of Moks. It has existed since the 4th century.

Gandzasar’s most important structure is the imposing Cathedral of St. Hovhannes Mkrtich (Armenian: Սբ. Հովհաննես Մկրտիչ, meaning “Saint John the Baptist”). It is a large church with a cupola in the inscribed cross plan. The Cathedral was built between 1216 and 1238 by Hasan-Jalal Dawla, the Armenian prince of Inner Khachen and the patriarch of the House of Hasan-Jalalyan. It was consecrated on July 22, 1240, on the Feast of the Transfiguration (Vardavar) in attendance of some 700 priests.

According to historical sources, Gandzasar was founded on the site of the sanctuary with the skull of John the Baptist, which was brought to Artsakh by prince Asan-Jalal from Palestine. That is why in 1216 the central cathedral in honor of Hovhannes Mkrtich (St. John the Baptist) was built. The relics of the saint are buried under the altar of the church, araratour.com reports.

Moreover, the monastery also houses the relics of Saint Gregory the Illuminator and the relics of his grandson Grigoris, the blood of Zechariah, who is John the Baptist’s father.

The bas-reliefs on church’s exterior depict the Crucifixion of Jesus, Mary with baby Jesus, Adam and Eve, two ktetors (patrons) holding the model of the church, geometrical figures, such as rosettes, head of a bull and an eagle.

Gandzasar is the principal historic tourist attraction in all of Artsakh (Karabakh) and one of the top destinations overall. It is also a center of pilgrimage as the region's main historic cathedral both for Karabakh Armenians and tourists (of Armenian ancestry). It has been hailed as a “crown jewel” and the “encyclopedia” of Armenian architecture by the famous Russian scholar Anatoly. L. Yakobson of St. Petersburg’s Hermitage. Professor Charles Diehl (1859-1944) of the Sorbonne University, the renowned French art historian and specialist on Byzantium, placed Gandzasar in a group of five most important examples of Armenian monumental art which belong to the world’s architectural masterpieces, gandzasar.com reports.

British journalist and writer on the Caucasus Thomas de Waal noted that Gandzasar, the most famous church in Karabakh, "has acquired a mythical status in Karabakh." In his turn, Felix Corley wrote that it is, along with Ghazanchetsots Cathedral in Shushi, a powerful symbol of history and identity of Karabakh Armenians.

Gandzasar was attacked several times during the Karabakh War. On July 6, 1991 Soviet soldiers and OMON (special police) officers raided Gandzasar allegedly in search of guns. On August 16, 1992 some of the outlying buildings within the monastery complex were destroyed as a result of Azerbaijani bombardment by helicopters, which intentionally targeted the church. Corley writes that the attempted bombing of Gandzasar was not of any military importance and that its raid "appeared to be a deliberate attempt to attack the Armenian heritage in Karabakh."

According to the legend, when the Azerbaijani army bombed the monastery, the priest remained in the church, praying on his knees. At that moment angels appeared on both sides of the holy table. The angels said that the monastery was protected by God’s will and that there was no reason to be afraid. Witnesses say the angels’ tracks are still visible on both sides of the holy table.

Following the war, the monastery was completely refurbished through the funding of Russia-based businessman and philanthropist Levon Hayrapetyan, a native of Vank. Restoration works, which lasted from 2000 to 2002, included restoration of the altar, gavit, and tiling of the floor…