Serzh Sargsyan: Victories are What Call New Generations to Heroism. 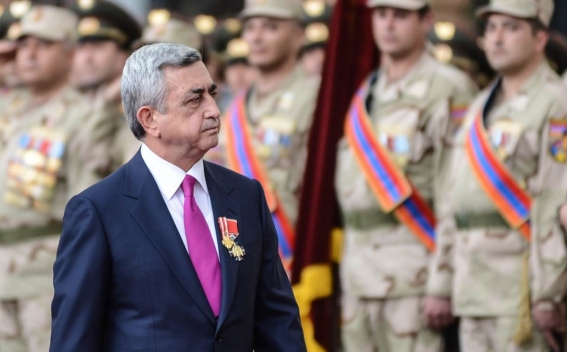 The third President of Armenia, Serzh Sargsyan, has issued a congratulatory message on Victory and Peace Day, his office informed.

Congratulations on the triple holiday of May - Great Patriotic War Victory Day, Artsakh Defense Army Formation Day and Shushi Liberation Day.
First of all, I warmly congratulate our Great Patriotic War veterans and wish them robust health. It was indeed a great happiness for them to see the glorious victory of their children and grandchildren in the fight for freedom and independence of our homeland decades after the Great Patriotic War.
Let there be only childbirth and wedding–dated tears of joy in the eyes of our fathers and grandfathers! God forbid that another war should bring them new suffering and sorrow.
At the cost of huge suffering and great losses, civilized humanity defeated fascism, xenophobia and dictatorship in World War II, the bloodiest war in the history of mankind.
Glory to those who contributed to the Victory! But unfortunately mankind did not get rid of evil and failed to thwart the dangers threatening humanity. Neo-fascists, modern-day terrorists, revolutionary dictators and invaders came as another challenge to human civilization.
Even in the twenty-first century we can witness devastating wars, refugees and human suffering. This is another challenge to progressive mankind; failure to resist it together is fraught with unpredictable consequences.
More than thirty years ago, the Armenian people heroically defied Azerbaijan’s aggression against Artsakh and crowned the liberation struggle against the invader with a brilliant victory.
Formed on the basis of volunteer squads amid the hardships of war, the Defense Army of Artsakh embodies the heroic spirit of our freedom-fighters.
Congratulations to my comrades-in-arms, the patriot-heroes who forged our victory in the Artsakh liberation war and with whom I had the honor to go through the ordeals of war and liberate a small portion of our homeland - the sacred land of Artsakh.
Victories are what call new generations to heroism.
Congratulations to our brave children who outstripped their heroic fathers and grandfathers in the latest warfare imposed on the Armenian nation four years ago and turned a new chapter of glorious victory in Armenia’s history.
On this day of dedication and remembrance, I bow with reverence to the memory of our brothers and sisters who laid down their lives on the altar of Homeland’s freedom. Eternal glory to them!
Reiterating my congratulations on the Triple Holiday, I wish us all lasting peace and creative work."
Հայերեն На русском