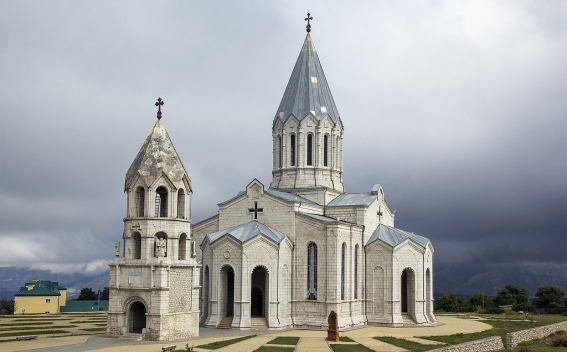 St. Savior Ghazanchetsots Cathedral, the white guardian angel in the center of Shushi, is a testament of the power of Armenian architectural art. Built between 1868 and 1887, the cathedral was consecrated in 1888, on 20th of September. Its name comes from Ghazanchi (present-day Qazançı), a village in Nakhichevan, Armenians migrants from which financed the church's construction.

According to historical sources people built the cathedral thanks to their craft only. They made cauldrons (or ghazan in Armenian) and used earned money to build the church. Locals say that while building the new church they came across one obstacle. They had only one priest serving at the church and the issue was that during a liturgy priest had to receive an absolution from another priest. To solve this the architects found a trick. They built an underground room and designed it in such way that a person could hear his own voice very clearly. Thus, every time before conducting a liturgy priest could receive absolution, hearing his own voice saying, “Let my ears hear what my lips utter”. This unique absolution room has been preserved until today. Holy Savior is surrounded by angels with horns in their hands that symbolize the last resurrection of Bible. When the judgment day comes angels will blow their trumpets and all dead people will resurrect, alive people will die and resurrect again in a minute. The angels are standing on the bell tower as it symbolizes the world's horn that calls all the people to a service. Angels that you see today are newly made since the older ones were destroyed during the Azerbaijani rule, 360greatarmenia.am reports.

Before the liberation, the church was in a dilapidated state and the dome was destroyed. In 1989, the monastery was used as an arsenal, before that the Azerbaijanis turned it into a barn. When it was liberated due to a difficult military operation, the Armenian tricolor fluttered on the ruined dome, and the smell of candles rose from the walls and arches of the church. The church was finally renovated in 1998, but there are still traces of mines on the church, which tells us about the hard days of Karabakh War.

St. Savoir Chazanchetsots Cathedral, built of smooth cream limestone, has 35 m length, 23m width, 35m height.  The bell tower is located a few meters west of the church and is a three-story building. At the entrance there are statues of angels holding trumpets, one of which is depicted on the coat of arms of the city of Shushi. For some time the Right Arm of Grigoris, the grandson of Gregory the Illuminator, was also kept at the church.

Chazanchetsots Cathedral is one of the most prominent Armenian churches.  It is the seat of the Diocese of Artsakh of the Armenian Apostolic Church. The cathedral is a symbol of history and identity for the Artsakh people.