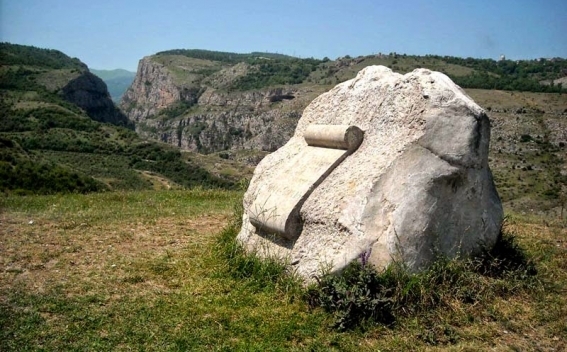 For the people of Artsakh humor has become an integral part of their character, regardless of everything. And the monument to a jester of Melik Shahnazar the Second (the ruler of Varanda) - Pele Pughi - became a symbol of their love towards humor and joy.

The monument to Pughi is located in a cave between the villages of Shosh and Mkhitarashen. It was built in 1976.

A question arises; who was the famous Artsakh citizen who became a symbol of joy?

Pele Pughi is a real person. He was born in 1731 in Shosh village of Varanda. His real name was Paul (Պողոս - in Armenian), but he is better known in Artsakh as Pele Pughi (Պըլը Պուղի - in Armenian). The word ''Pele'' in Armenian means ''mad'','' crazy'', which proves the comical nature of his folk character.

Pughi had a great reputation in Artsakh. His fame also spread orally by a word of mouth beyond the borders of his native land. Melik Shahnazar the Second, the ruler of Varanda, hearing about his ingenuity, invited him to live in his court.

In court Pele Pughi was more than a jester. He occupied a position of jester-advisor. But it should be mentioned, that he didn’t flatter Melik Shahnazar, moreover, with his witty remarks he tried to direct him, showing the truth and the right path.

His funny stories and fables are not only humorous, they contain also sententious tendency and show the vicious aspects of life and social relations of that time.

Many materials of Pughi are preserved in the Institute of Archaeology and Ethnography of National Academy of Sciences of Armenia, in the Museum of Literature and Art after Yeghishe Charents in Yerevan and elsewhere.

Although Pele Pughi died in 1810, he still lives in the memory of Artsakh people. Nowadays you can’t find a person in Artsakh, who isn’t aware about him. And his monument, which is situated in Hunot canyon, makes brighter and passes on his memory and fame from generation to generation.