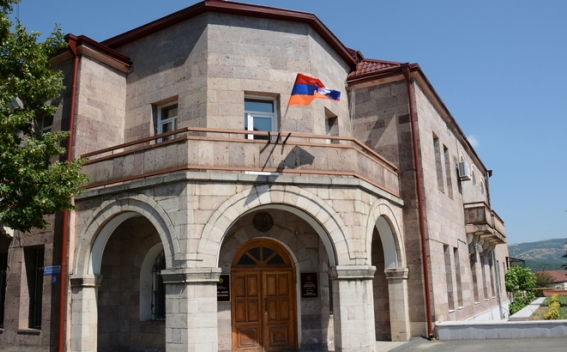 The Information and Public Relations Department of the Foreign Ministry of the Republic of Artsakh issued a statement on Ilham Aliyev’s remarks during a video format at the 75th session of the UN General Assembly.

The statements made by the Azerbaijani President during the interview with regard to the Azerbaijan-Karabakh conflict settlement process, demonstrate the degree of confusion of the Azerbaijani authorities in conditions when the long-standing strategy of Baku, based on blackmail and threats, proved to be ineffective and completely exhausted.

The long-term practice of the Azerbaijani authorities in distorting the essence of the Azerbaijan-Karabakh conflict, hindering the restoration of full-format negotiations, biased interpretation of international law aimed at justifying territorial claims both against the Republic of Artsakh and the Republic of Armenia and ascribing to themselves an alleged right to unleash a new aggression has led the conflict settlement process into the situation where it is now, without bringing any additional political dividends to official Baku. The policy of isolating Armenia and Artsakh and hindering the economic growth of the two Armenian states declared by the President of Azerbaijan, as well as attempts to exploit the religious factor in the context of the Azerbaijan-Karabakh conflict turned out to be equally ineffective.

It is obvious that, having lost its main instrument, which was limited to striving to achieve unilateral concessions through threats and coercion, official Baku found itself outside its comfort zone and is trying to return to its usual environment, increasing the intensity of bellicose rhetoric directed not only against the Armenian parties, but also the settlement process as a whole.

If the authorities in Baku are really interested in achieving lasting peace in the region, they must abandon the policy of military blackmail and threats, recognize the fact that the people of Artsakh have realized their right to self-determination, and sit down at the negotiating table in order to find solutions to eliminate the consequences of the armed conflict unleashed by Azerbaijan itself''.