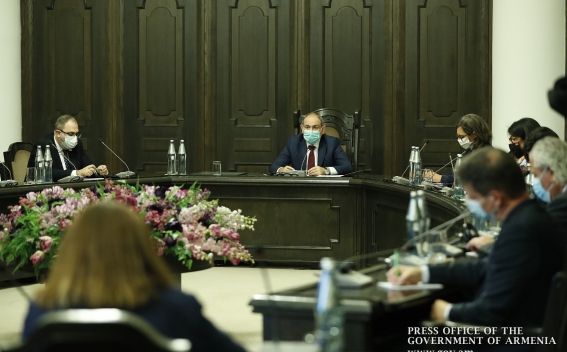 Prime Minister Nikol Pashinyan received a French parliamentary delegation in visit to Armenia. The Prime Minister thanked them for visiting Armenia at this difficult time and for standing by the Armenian people.

“Indeed, we feel your presence and support not only when you are physically by our side, but also throughout your activities. I would like to express my sincere appreciation of French President Emmanuel Macron’s efforts. He was the first international leader to speak about this situation in the language of truth, clearly stating that Syrian mercenaries are involved in the war against Karabakh, and that Turkey is the main instigator behind the war,” Nikol Pashinyan said, noting that he keeps in close touch with the President of France.

Coming to the situation in Nagorno-Karabakh, the Prime Minister said it remains tense on the frontlines. “In fact, under various pretexts Azerbaijan has declined the international efforts aimed at achieving a ceasefire. By and large, the state of affairs is as follows. Any compromise acceptable to Armenia turns out to be unacceptable for Azerbaijan. This is not something novel: we could witness that approach all the way through the peace talks. I can cite the example of 2011 to make it clear that this is not a surprise for us. In 2011, when the well-known Kazan process was going on, the Republic of Armenia accepted the proposed compromise. There was a mutually agreed text of settlement, but Azerbaijan suddenly toughened its position and refused to sign it at the very last moment” Nikol Pashinyan said.

According to the Prime Minister, the international community is looking forth to a compromise-based negotiated settlement of the Nagorno-Karabakh issue, which the Armenian side understands.

“Compromise implies that both sides should show some flexibility with regard to their initial benchmarks, but the point is that when Armenia makes its share of concession, the next moment the situation becomes unacceptable for Azerbaijan, which sets forth higher claims. This is what eventually led to renewed hostilities. We can actually witness the same situation in this war, starting with the Moscow statement. Another agreement was reached, brokered by President Macron, which yet again was undermined by Azerbaijan,” Pashinyan said, noting that here, too, Turkey played a decisive role, because every time a ceasefire is being discussed, the Turkish Foreign Minister or the President state that Azerbaijan should not stop fire.

“This is an important nuance, since we can see that not more than 1/3 of military operations are actually controlled by the President of Azerbaijan, considering that Turkish servicemen, Turkey-backed terrorists and mercenaries are involved in the ongoing hostilities,” Nikol Pashinyan emphasized. The Prime Minister added that Armenia’s views on the settlement of the Nagorno-Karabakh conflict remain the same.

“We think that there is no military solution to the issue. We must find a compromise. Armenia is ready for compromise just as it was before, but the main impediment is that any situation that is acceptable to Armenia in the logic of compromise becomes unacceptable for Azerbaijan which, strong with Turkey’s support, demands more and more. It is unclear how far they will go with such one-sided claims and where the limit of their appetite is. Therefore, following this logic, our primary task is to ensure the self-defense of Nagorno-Karabakh and its people, so that we could come to a truly diplomatic solution of the conflict,” Nikol Pashinyan concluded.

The Prime Minister answered a number of questions of interest to the French MPs, during which he referred to the discussions held with the OSCE Minsk Group Co-Chairs, Turkey’s destructive policy, its regional aspirations, Israel’s indirect involvement in the Karabakh-Azerbaijani conflict, and the Armenian people’s expectations from the international community.

The Premier stressed that the determination of the status of Artsakh and the exercise of the right to self-determination remain a matter of primary concern for the Armenian people.

The members of the French parliamentary delegation thanked Prime Minister Pashinyan for detailed discussion and went on to inform him that they were set to leave for Nagorno-Karabakh to get a first-hand view of the situation on the spot.