Azerbaijan has Become a Hub of Terrorism in the South Caucasus: Zohrab Mnatsakanyan 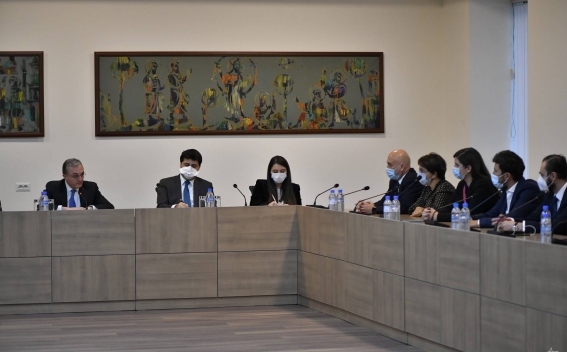 On November 3, Foreign Minister Zohrab Mnatsakanyan received a delegation of the "European Youth for the Recognition of Artsakh's Independence" program, consisting of former and current EU MPs, foreign journalists, initiated by the European Office of the Armenian General Benevolent Union.

Welcoming the guests, Minister Mnatsakanyan noted that the visit of such a representative delegation in this difficult period is extremely important for Artsakh as an expression of support and solidarity towards the Armenians of Artsakh.

Zohrab Mnatsakanyan informed the participants about the large-scale aggression unleashed by Azerbaijan against Artsakh, which is accompanied by war crimes and actions aimed at the physical extermination of the Armenians in Artsakh. The Minister provided detailed information on the facts of deliberate targeting of civilian population and the shelling of civilian settlements by the Azerbaijani armed forces in parallel with the deliberate arsoning of the forests with the use of banned weapons.

The Foreign Minister drew the guests' attention to Turkey's destabilizing role being directly involved in the hostilities carried out by Azerbaijan, which is manifested in the recruitment of foreign terrorist fighters from the Middle East and their deployment in the conflict zone. "Azerbaijan has become a hub of terrorism in the South Caucasus - a state sponsoring terrorism," the Foreign Minister emphasized.

Touching upon the ceasefire agreements reached through the mediation of the OSCE Minsk Group Co-Chair countries, Minister Mnatsakanyan noted that Azerbaijan, avoiding to fulfill its commitments, proves once again the latter's inability to resolve the conflict peacefully.