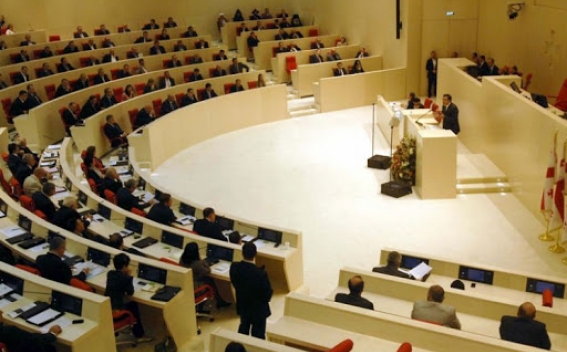 The parliament of Georgia unanimously adopted on Friday a resolution to proclaim the country’s aspirations for membership in the European Union and NATO, TASS reports.

"Membership in the North Atlantic Treaty Organization remains a zero-option priority in Georgia’s foreign policy. Trans-Atlantic unity is the most important precondition for strengthening global security," the resolution reads.

According to the document, membership in the European Union also remains a "zero-option priority" for the country.

In line with the resolution, the country favors only peaceful settlement of all conflicts.

Executive Secretary and Political Council Member of the ruling party "Georgian Dream - Democratic Georgia" Irakli Kobakhidze said in October that the country would apply for full-fledged EU membership in 2024. It was his party’s main electoral promise.

Georgia has been cooperating with NATO since late 1990s. Georgian President Eduard Shevardnadze (1928-2014) expressed the country’s aspiration to join the alliance at a summit in Prague in November 2002. This intention was later confirmed by his successor Mikheil Saakashvili.

The new Georgian government, which ascended to power after the Georgian Dream coalition won in October 2012, continued the policy aimed at joining NATO, while at the same time branding "gradual normalization of ties with Russia as a goal of utmost importance without compromising Georgia’s territorial integrity." Secretary General of NATO Jens Stoltenberg visited Tbilisi in 2015 and 2016, when he assured the Georgian leadership that Georgia would become a NATO member, while conceding that he could not lay out a precise timetable of admitting the country.

Since 2009, Georgia has been a member of the European Union’s Eastern Partnership program, aimed at developing regional cooperation with former republics of the Soviet Union. IN 2014, Georgia signed an Association Agreement with the European Union. In 2017, Georgian citizens were granted visa-free travel to countries of the Schengen Area.