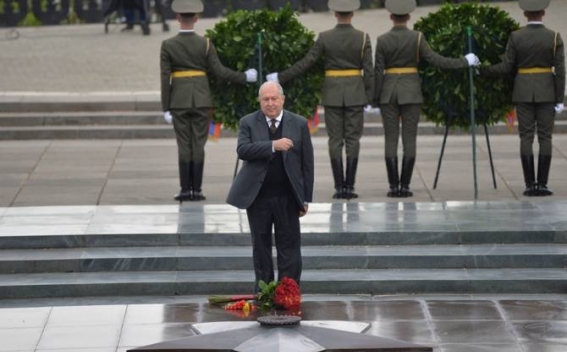 Today is the Victory and Peace Day.

Let us remember all those who fought with the confidence to win and determination not to lose.

Let us remember all those who fell for victory and peace.

Let us bow before to memory and heroism.

They won, liberating Shushi about thirty years ago.

They won, capturing Berlin more than seventy-five years ago.

They were all convinced that freedom and victory were never given as a gift, but were obtained through will and efforts, often at the cost of life and health.

During the Second World and Great Patriotic Wars, the Armenian people, along with other peoples of the Soviet Union and Europe, heroically participated in the struggle against fascism.

At the end of the 20th century, our people again faced the fact of planned hatred of Armenians; this time, they had to fight against the Azerbaijani aggression.

In the 21st century, we have once again faced the threat of hatred and ethnic cleansing in the form of a joint Azerbaijani-Turkish war against Artsakh.

These days, when it is another anniversary of the world’s victory over fascism, the world is facing new challenges. We need to rethink the ideas of victory and peace, realizing their high value and importance.

Our grandfathers died for these ideas in the Second World and Great Patriotic Wars. I bow to their memory and send my best wishes to our veterans, who are a living textbook of life and work.

Their present-day generations sacrificed themselves for those ideas in the first Artsakh war. Let light come down to their graves.

Our today’s heroes in Artsakh sacrificed their lives for those ideas. I pray for the peace of their souls, bow to their memory, and address my words of gratitude and consolation to their families and relatives.

I pray for the recovery of our injured soldiers, for the speedy return of the captives, for the quick finding of the missing, serving my efforts and opportunities to that cause.

I wish good health and trouble-free service to the servicemen and volunteers who guard our borders, protect our peace and security.

This year marks the 30th anniversary of Armenia's declaration of independence. To attain independence was also the victory of freedom and will. Today, at a distance of years, it reminds us that any attainment, especially a victory, must develop and transform into a strong state and organized society, dignified peace, and sustainable progress. We must win. The guarantee of that is our unity and will, our determination and organization, our purposefulness and discipline.

Let's live, and work so that to be worthy of victory.

Glory to the heroes of Victory!