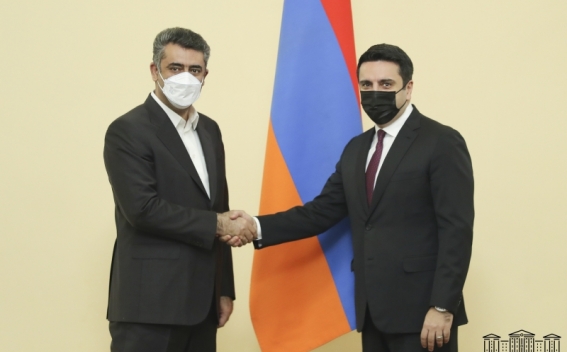 On December 20, the President of the National Assembly of the Republic of Armenia Alen Simonyan received the delegation led by the Head of the Iran- Armenia Parliamentary Friendship Group of the Majlis of the Islamic Republic of Iran Seyed Mahdi Farshadan.

Welcoming the guests, the RA NA President expressed conviction that the visit of the Friendship Group would be of practical significance for the Armenian-Iranian close relations for the benefit of the further strengthening of the inter-parliamentary cooperation.

The sides have recorded the political active dialogue between the two countries, which is a firm basis and guarantee for the development of the inter-state relations in numerous spheres. The development of the inter-parliamentary cooperation has been highlighted, observing it as a key platform of expansion for the framework of the friendly countries’ united viewpoints. In this context the effective activity of the Parliamentary Friendship Groups was underlined.

At the meeting a talk was held over the necessity of lasting peace and stability in the region. Alen Simonyan has touched upon the deconstructive behaviour of the Azerbaijani side, noting that it has a negative influence not only on Armenia, but also on other countries of the region.

At the end of the meeting the Head of the Iran- Armenia Parliamentary Friendship Group Seyed Mahdi Farshadan conveyed to the RA NA President the invitation of the President of the Iranian Majlis Mohammad Baqer Qalibaf for the official visit to Iran.