I Believe that the Armenian State Will Rise From Its Slumbers: Serzh Sargsyan 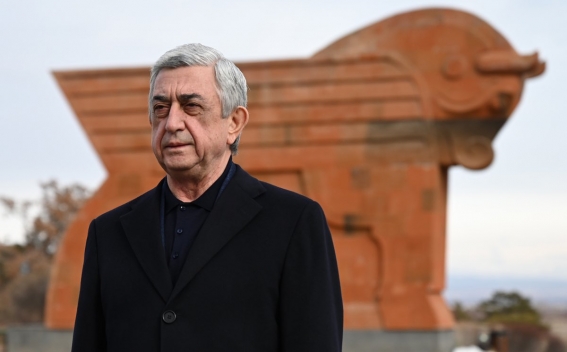 On the occasion of the 30th anniversary of the formation of Armenia’s Armed Forces, Third President of the Republic of Armenia Serzh Sargsyan visited the Sardarapat Heroic Battle Memorial, from where he sent a message.
Serzh Sargsyan paid tribute to Armenian heroes who fell in the Sardarapat Battle by laying a wreath at the Sardarapat Memorial.
Earlier today, a wreath was also laid in the Yerablur military pantheon at the memorial wall which immortalizes the memory of those who made the greatest contribution towards building the Armenian Army and those heroes who fell for the sake of freedom and Homeland’s independence.
***
RA Third President Serzh Sargsyan’s Army Day Message
Today I am sending my Army Day-dated message from the Sardarapat Memorial, which symbolizes the victorious spirit of the Armenian soldier and the Armenian national dignity. Every symbol has its significance here – a venue, where the remains of the Sardarapat Battle heroes and Artsakh freedom-fighters lie, where the immortal souls of Armenian heroes continue to inspire strength, determination and unwavering faith to anyone ready to defend the homeland.
The embodiment of all those forces that view things in a sober light was formed here as a warning addressed to the enemy, but also as an awakening call addressed to our people, so that they never lost their vigilance and refused to be ruined through vain promises. This is a pledge for reinstating and re-evaluating Armenia’s independence that was lost for centuries in a fight-to-death struggle; this is a message for Armenia’s rebirth; this is a call for being ready to stand next to the Armenian soldier at crucial moments and for making it possible again what seemed to be impossible.
On the occasion of the anniversary of the Armenian army, which saw both glorious victories over the past three decades and a bitter defeat in the latest war under the command of treacherous and bashful leaders, I urge everyone to listen to the call of Sardarapat and live up to the memory of our heroes martyred for the sake of homeland.
I believe that the Armenian state will rise from its slumbers; I believe in the wisdom of the Armenian people and in our upcoming victories. I do believe because my comrades-in-arms and I listened to the call of Sardarapat as Shushi and Artsakh’s other settlements were being liberated some 30 years ago.
I believe that the Sardarapat Memorial’s bells will herald ever new victories forged by the glorious Armenian army, the 30-year-old child of our people.
Happy birthday, Armenian army!
Հայերեն На русском