The Government Plans to Review the Requirement to Wear Masks Indoors 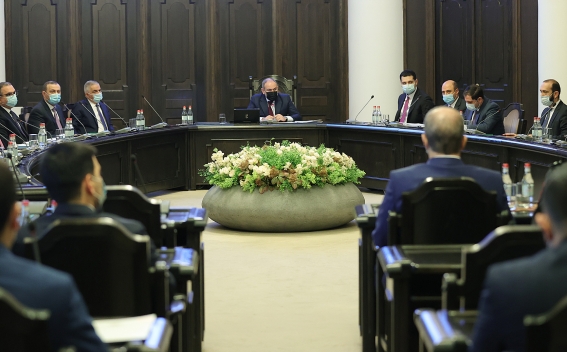 The regular sitting of the Armenian Government took place today, chaired by Prime Minister Nikol Pashinyan. Before discussing the issues on the agenda, reference was made to the current pandemic situation caused by the coronavirus infection in Armenia. Minister of Health Anahit Avanesyan noted that the situation over infections is steadily declining. The Prime Minister noted that the main news is that there is a steady decrease in daily numbers, and slightly more during the last week. "I want to remind you that in case of arrival of the "Omicron", as we expected, we had unprecedented daily numbers, up to 4500. But since then, our numbers have been steadily declining. Experts say that the decline in these numbers will continue. Now, in fact, we are discussing the issue of lifting the requirement of wearing masks. In other words, even indoors, we will not have a mandatory requirment to wear masks, but it will be just recommended to wear it.”

The Government adopted a decision to allocate 1,155,205.8 thousand AMD to improve the living conditions of the residents of the border communities of the Republic of Armenia and to provide assistance to the communities. The money will be provided to the residents of 81 settlements in 23 border communities of Ararat, Gegharkunik, Vayots Dzor, Syunik, and Tavush Provinces to partially reimburse the natural gas, electricity, and irrigation water tariffs.

By the decision of the Government, 1,435,428.6 thousand AMD will be allocated to the regional administrations of Aragatsotn, Ararat, Gegharkunik, Lori, Shirak and Syunik to ensure the process of providing subsidies to the communities. Nikol Pashinyan, referring to the programs, noted that with this decision the Government is implementing yet another financing of subsidy programs. In this context, the Prime Minister stressed the need for quality work.

The Government made a decision to ensure the smooth running of the grant program of the Vedi Reservoir construction, supported by the Government of the French Republic. According to the Minister of Territorial Administration and Infrastructure Gnel Sanosyan, the works are planned to be completed by the end of the year. The construction of the dam is about 80% completed, the construction of the reservoir will be completed by the end of this year. "But the other systems are built in such a way that the streams from the rivers that are supposed to come and fill the reservoir, come, pass through the reservoir area and serve the population during the irrigation season, until we fill the reservoir completely," the Minister said.

Nikol Pashinyan noted that during the pre-election period the need to build about 15 new small reservoirs was also raised. "We have some progress in that program now. We allocated 2 billion AMD from the 2022 budget for the design of reservoirs. We are also starting the design of Kasakh, Argitchi, Astghadzor, Elpin, Artik, Lichk and Yeghvard reservoirs. At the same time, it is very important to emphasize that, as previously agreed, during this design work, we also consider the energy potential, the extent to which these reservoirs can have energy potential. That is, the expediency of building and installing hydroelectric power stations on reservoirs or streams.”