Since Yesterday, Peacekeepers Are Not Only in Parukh, but Also in Karaglukh: President of Artsakh 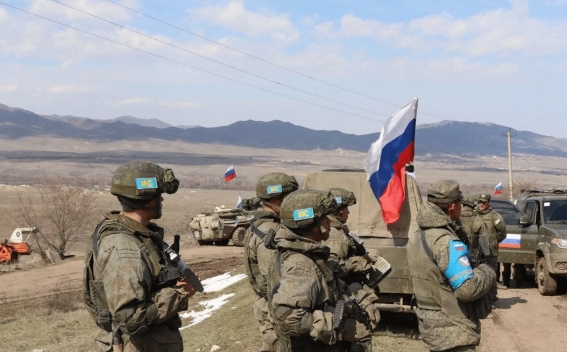 The right of the people of Artsakh to self-determination has been and will be the main guide of the country's foreign policy. The President of Artsakh (Nagorno-Karabakh) stated at the Government session, referring to the recent geopolitical developments and the situation around Artsakh, 1lurer.am reports.

Arayik Harutyunyan (President of Artsakh) - The international norm of self-determination of the people of Artsakh, the Artsakh Republic will be our main guide. We will not deviate from that, this is unequivocal.

In the area of ​​responsibility of Russian peacekeepers in the Parukh and Karaglukh area, where Azerbaijani forces are now deployed, the defense army withdrew to ease tensions on the line of contact, Harutyunyan said.

Arayik Harutyunyan - We had such a precedent in Yeghtsahogh, in the Mataghis section, in the Taghavard section, in the areas of the tense line of contact, where we replaced our positions with peacekeeping forces, we had a certain stability, a calmer situation.

According to the trilateral statement of November 9, 2020, only peacekeepers should be on the line of contact between the Azerbaijani and Karabakh armed forces, the President of Artsakh stressed. He added that due to the continuous aggression of Azerbaijan, the Defense Army continues to be on combat duty, including at the highest point of Karaglukh.

Arayik Harutyunyan - Peacekeeping forces are deployed in Parukh, on several main heights of Karaglukh, the units of the Artsakh Defense Army are at the highest point, also volunteers and NSS units. There are Azerbaijani units on some heights of the mountain range, and Russian peacekeepers have been in the Karaglukh area since yesterday, not only in the Parukh area, but also in the Karaglukh area.

During a difficult geopolitical period, the Artsakh authorities are reviewing the working agenda. President Harutyunyan urged the members of the Government to be united so that the management system works operatively. Harutyunyan also expects unity in the political field. It is not about having a coalition, but having a common political agenda.