PM Pashinyan, the German Ambassador Discuss the Agenda of the Armenian-German Partnership 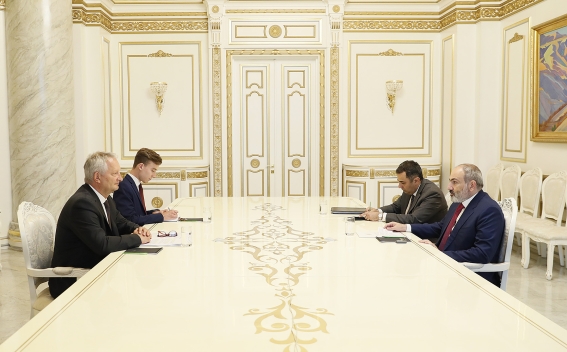 The Prime Minister stressed the importance of relations with Germany, which is Armenia's largest trade and economic partner among the EU countries, and expressed confidence that the high level political dialogue will further promote mutually beneficial cooperation.

Ambassador Richter noted that Germany is interested in developing cooperation with Armenia and reaffirms its support for Armenia's democratic reforms.

The interlocutors discussed the prospects for deepening Armenian-German ties. Expressing satisfaction with the programs implemented within the framework of the bilateral agenda, Nikol Pashinyan considered intensive agriculture a promising direction. The Ambassador of the Federal Republic of Germany welcomed the Prime Minister's proposal and mentioned also the joint programs in the fields of SME, energy, water management, e-governance, finance and other spheres. The sides attaches importance to the activities of the German Agency for International Cooperation (GIZ) and the Reconstruction Credit Institute (KfW) in Armenia.

During the meeting the sides also touched upon regional developments and work on unblocking the communication routes. PM Pashinyan and Ambassador Richter exchanged views on the situation in Nagorno Karabakh.

The Prime Minister presented Armenia's positions on the settlement of the Nagorno-Karabakh conflict and the peace agenda announced by the Armenian Government. Nikol Pashinyan stressed that the issue of Nagorno-Karabakh's status remains unresolved, it should be settled within the framework of the internationally recognized format, under the mandate of the OSCE Minsk Group Co-Chairs. The Prime Minister touched upon the issues of the return of Armenian prisoners of war, hostages and other detainees still being held in Azerbaijan, the protection and preservation of the Armenian historical and cultural heritage in Nagorno-Karabakh.

Victor Richter expressed the support of the German Government to the agenda of establishing peace in the region and the settlement of the Nagorno-Karabakh conflict within the framework of the OSCE Minsk Group Co-chairs.

The Prime Minister of the Republic of Armenia noted the targeted response of the progressive international community to humanitarian and security challenges.