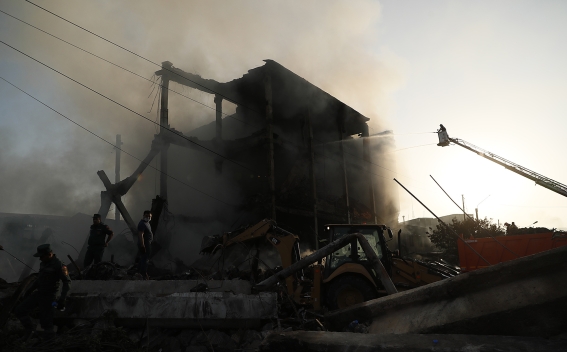 At least six people have died, 16 are missing after huge explosion and fire at Surmalu market in Yerevan, the Mimistry of Emergency situations reports.

The efforts to extinguish the fire continues.

Firefighting works are carried out in six locations. Fourteen water carriers of Yerevan Municipality, eight trucks, three tractors and two cranes are involved in the works.

350 rescue workers and about 150 volunteers took part in the firefighting efforts, Armradio reports.

Four victims have been identified as Anahit Mkhitaryan, Misak Margaryan, Gemma Nazaryan and Gayane Avetisyan. Two of the victims are yet to identified.

Rescue teams from Shirak and Tavush have departed to the scene.