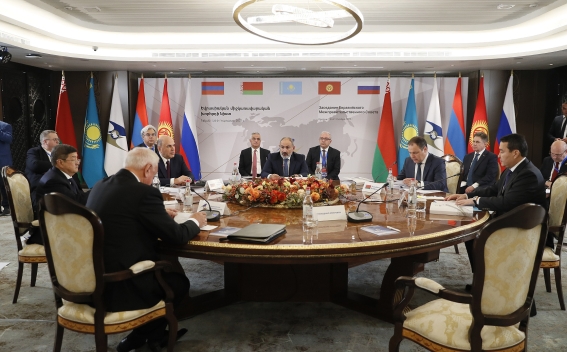 Despite the global political tension and difficult socio-economic situation, the Eurasian Economic Union (EAEU) is consistently implementing the integration agenda, by deepening the cooperation between our countries, Prime Minister of Armenia Nikol Pashinyan said during the extended-format session of the Eurasian Intergovernmental Council in Yerevan, Armenpress reports.

"In the current year, under conditions of new and ongoing global challenges, we can register surely the existence of positive results and trends of the mutual trade. We have reached significant achievements in the development process of the EAEU. A large single market has been created, the mutual trade figures have increased considerably. Armenia’s trade turnover with the EAEU states has reached 2.8 billion US dollars in January-August of this year and increased by 74% compared to the same period of the past year. Moreover, Armenia’s export has increased twice, and the import – by 58%", the PM said.
Հայերեն На русском