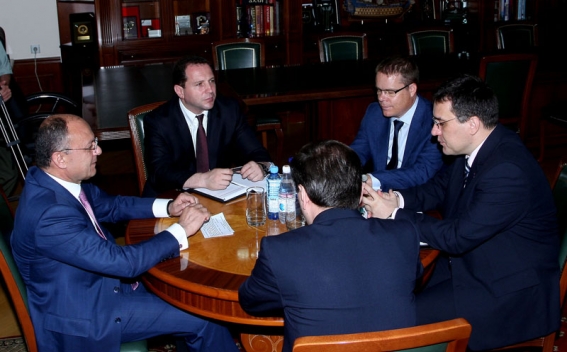 On July 25, Defense Minister of the Republic of Armenia, Seyran Ohanyan met with the Head of the EU Delegation to Armenia, Ambassador Traian Hristea who is ending his diplomatic mission in Armenia, official webpage of Defense Ministry reports.

Welcoming the guest, Ohanyan noted that relations between Armenia and the European Union have intensified in recent period and cooperation is dynamically developing. He attached importance to reforms in Armenia’s public administration and the EU’s support for development of democratic institutions, expressing hope that the efficient cooperation and active dialogue between Armenia and the EU will continue.

The minister said that during his tenure Hristea has done active and fruitful work contributing to the extension of Armenia-EU cooperation in various spheres.

In addition, Ohanyan noted that  Armenian Defense Ministry take an active part in conferences, courses, and roundtables held under the EU Eastern Partnership (EP) program, which provides security and defense experts of EaP countries with a good opportunity to exchange their experience, opinions and approaches.

At the end of the meeting Seyran Ohanyan thanked Ambassador Hristea for his activities in Armenia and wished him success.