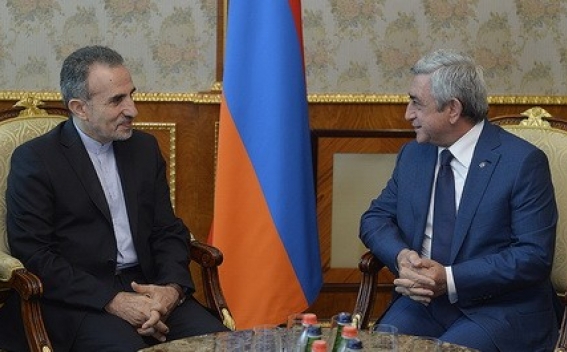 Meanwhile, local analysts expect that additional funding of Iran will create an opportunity for the implementation of the Armenian-Iranian projects which have been suspended due to lack of finances. It is worth noting that after the signing of the nuclear deal the Armenian-Iranian relations continue to develop in the diplomatic, economic and political spheres. In January 2015, Iranian Foreign Minister Mohammad Javad Zarif, during his visit to Yerevan, said the expansion of relations with Armenia is among the priorities of Iran's foreign policy. He said that Iran is interested in developing relations with friendly Armenia in all fields without any restrictions.

A few days ago the President of Armenia Serzh Sargsyan received Mohammad Raiesi, ambassador extraordinary and plenipotentiary of the Islamic Republic of Iran to Armenia, at the completion of his diplomatic duties and noted that "the relationship with Iran is of vital importance to Armenia and is conditioned by historical and cultural similarities, mutual economic interests and geopolitical peculiarities, and by common approaches to a number of regional issues."

After signing the nuclear deal in June, consultations between the foreign ministries of the two countries were held in Tehran. As a result of the talks, the delegations signed a Memorandum of Understanding. A few days later, Armenian Foreign Minister Edward Nalbandian received the delegation of Iran-Armenia parliamentary group. The sides discussed a number of urgent regional issues.

In July, President Serzh Sargsyan received the Minister of Culture and Islamic Guidance of Iran Ali Janati. The two sides stressed that the relations formed in the sphere of culture provide a solid foundation for the development and deepening of Armenian-Iranian relations in the political, economic and other spheres. Later Iran and Armenia signed a Memorandum of Understanding on cooperation between the museums of the two countries.

In August, the Prime Minister of Armenia Hovik Abrahamyan had a telephone conversation with the first vice-president of the Islamic Republic of Iran Es'haq Jahangiri, during which the sides reached an agreement to start construction of the third Armenia-Iran high voltage electricity transmission line.

In September, a delegation of the Ministry of Finance of Armenia was on a working visit in Tehran. During the talks, the sides discussed issues related to the development and expansion of cooperation between the customs services of Iran and the Republic of Armenia, in particular, electronic information exchange of customs data, financial and joint investment projects. Agreement was reached on the exchange of preliminary information regarding the means of transportation crossing the border through IT. The sides also stressed the importance of facilitating the border crossing procedures of the means of transportation belonging to the citizens of both countries, as well as accelerating the flow of cargo and passengers at the Iran-Armenian border crossing point.

Cooperation between Armenia and Iran is carried out in the format of BRICS – EEU - the Shanghai Cooperation Organization, which particularly became apparent during a joint summit of these organizations in Ufa. There the RA President Serzh Sargsyan again stressed the importance of the construction of Armenia-Iran railway.

It is obvious that the Armenian-Iranian relations are developing dynamically, but the potential of this cooperation is, of course, more. Armenia should significantly increase its efforts in order to realize the full potential.