Edward Nalbandian: 2015 was a Special Year for the Armenia-EU Cooperation 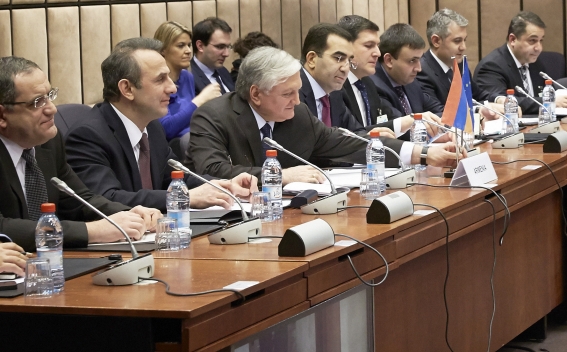 In Brussels the 16th meeting of Armenia-EU Cooperation Council took place, following which the Armenian Foreign Minister Edward Nalbandian came up with a statement. As the press service of the RA MFA informs, the statement reads as follows:

In the framework of the 16th session of Armenia-EU Cooperation Council, together with our EU colleagues, we have had extensive discussions on the further development of Armenia – European Union relations, which included such issues as: Political dialogue, negotiations on a new framework agreement between Armenia and the EU, that would adequately reflect the depth and essence of our partnership, mobility, human rights, pace of reforms and others.

2015 was a special year for the Armenia-EU cooperation. We witnessed high level visits, an intense and constructive dialogue with an impressive number of bilateral meetings, simultaneous negotiations on Armenia- EU agreements in various areas.

The Eastern Partnership summit in Riga in May 2015 was a success with Joint Declaration reaffirming our shared vision of the Partnership based on mutual interests and commitments, supporting sustained reform processes in partner countries and highlighting the main directions for the further developing and strengthening of comprehensive cooperation in all areas of mutual interest.

Armenia welcomed the European Neighborhood Policy review process. We highly appreciated the EU initiative to engage the partner countries in this process. We are pleased to note that on 14th December 2015 the EU Council endorsed the principle of differentiation to be applied to the partners, taking into account the progress made in implementation of their commitments and reforms.

We expressed our appreciation to the EU for its continued support and assistance provided to our country over the years which have been instrumental for the effective implementation and sustainability of the reform process and institutional capacity building in Armenia.

Last month’s launch of the negotiations on a new legal framework of Armenia – EU relations was a new threshold in our relations. We hope that the new agreement will reflect the depth and essence of our bilateral relations and set new guidelines for mutually beneficial cooperation.

Based on shared values, Armenia is interested in working with the EU on to the continuous promotion of human rights and rule of law, consolidation of democratic institutions and improvement of judiciary, good governance, fight against corruption, strengthening the civil society. We are thankful to the EU for its valuable support in this regard.

Constitutional reform in Armenia that the Venice Commission of the Council of Europe characterized as of “extremely high quality” and “ in line with international standards”, was approved by the nation-wide referendum last December. It is another important step also aimed at advancing many of the mentioned goals.

During recent months alongside the deliberations on the legal basis of our relations, the Armenian side has been actively engaged in negotiations with the relevant bodies of the European Commission regarding our participation in a number of EU programs. We are glad to state today that negotiations on Armenia’s participation in the EU Framework Program for Research and Innovation Horizon 2020 are successfully concluded and we expect the Agreement to be signed shortly.

We look forward to develop our cooperation in the transport area as well, in this respect we underlined the importance of timely starting of negotiations on the Common aviation area.

We attach great importance to people to people contacts, and view enhanced mobility of our citizens as an important prerequisite for bringing our societies closer. It is almost two years now that the EU-Armenia Visa Facilitation and Readmission agreements are being implemented. We believe that time has come to move forward towards the Dialogue on Visa liberalization as it is enshrined in Joint Declaration of Eastern Partnership Riga Summit.

I have presented our European colleagues on the worldwide events on Armenian Genocide centennial, which we marked last year. Several thousands commemoration events held on all continents, supported by the four fundamental pillars. Those are remembrance, gratitude, prevention, and revival. These four notions are also deeply symbolic for the commemoration of all other crimes of genocide committed throughout the human history. I have used this opportunity to express our gratitude to the European Parliament, EU countries for their principled position on this issue and expressions of support and sympathy to Armenia.

I also talked about Armenia’s active engagement in efforts of international community on prevention of genocides and crimes against humanity. We thank the EU countries for their support to Armenian initiatives within the UN formats.

I briefed the Council on latest developments related to the Nagorno-Karabakh conflict and in particular on the results of the meeting between the Presidents of Armenia and Azerbaijan in Bern. The agenda of that summit was dictated by the escalation of situation as a result of Azerbaijan’s provocations, gross violations of cease-fire regime. Unfortunately, the relative calmness in the conflict area has ended with resumption of gross violations of cease-fire regime by Azerbaijan.

We also touched upon regional security issues and other topics of international political agenda.