Ataturk's Daughter was an Armenian 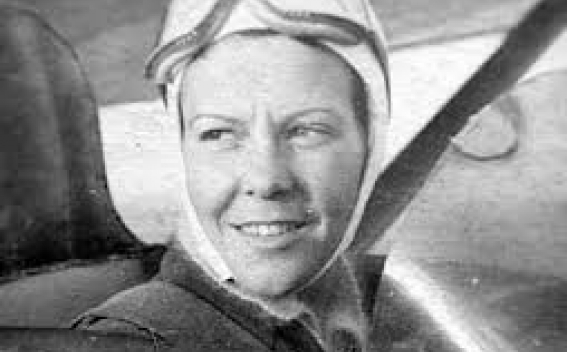 The story of Sabiha Gokcen, the adopted daughter of Kemal Ataturk, the first president of the Turkish Republic and the founder of the modern Turkish state, still remains a mystery. Some called this blue-eyed beautiful girl the daughter of Ataturk, others claimed that Sabiha was his wife in reality. But even more mysterious is Sabiha's origin.

According to Turkish sources and the interview with Sabiha Gokcen herself, she was born on March 22, 1913 in Bursa. She was the daughter of Mustafa Izzet Bey and Hayriye Hanim who were ethnic Bosniaks. The girl's parents died early, and she was raised in an orphanage in the city of Basma, which in 1925 was visited by Kemal Ataturk.

Blue-eyed girl immediately caught the attention of the Turkish ruler. After reading her biography Atatürk decided to adopt a 12-year-old Sabiha. He gave her surname Gökçen (Gökis ''The sky'' in Turkish) only after the introduction of the surnames law in 1934. Then, remaining true to the meaning of her surname, she chose a career of a pilot. And it all began. On May 5, 1935, together with Ataturk, Sabiha attended the opening ceremony of the Summer School "Türk Jackpot". Airshow gliders and parachutists invited from other countries fascinated Sabiha so much that in an aswer to the question of Ataturk whether she wanted to become a pilot, she did not hesitate: "Yes, right now!" So she became a student of the newly opened school, realizing the dream of Ataturk on the sky. At the age of 23, Sabiha became Turkey's first female pilot and the first woman as a military fighter pilot, diplomat.am writes .

It was Hrant Dink that for the first time spoke about the Armenian origin of Sabiha. A woman from Armenia went to the Editorial of "Agos" newspaper. She was looking for her relatives in Turkey. Journalist Elena Solntseva, who was writing about Dink's activities in connection with the search for missing relatives, said: "Hripsime Sebildzhyan from Armenia looking for her aunt Khatun, who was lost in the Ottoman Empire during the First World War, wrote to the editor that her mother Tiruhi spent many years searching for her sister" ... and in fact she did not have to look for her: according to the journalists of "Agos" newspaper, everybody knew that woman in Turkey. According to the stories of Hripsime, when their grandparents were killed during the Genocide, Tiruhi with her sister Hatun were left in an orphanage. Once a group of soldiers went there together with the Turkish leader Kemal Ataturk who liked the girl and took her with him giving her the name Sabiha Gokcen.

Article of Dink called ''The Secret of Sabiha Gokcen" was a real bomb. "We spent a lot of time to prove that the national heroine of Turkey Sabiha Gökçen was actually an Armenian. The article"The Secret of Sabiha Gokcen"has opened the curtain on her true origins. Sabiha was a miracle survivor of the Armenian children who lost their parents during the Genocide, and afterwards Ataturk took her to Ankara giving her a new name ...." Hrant Dink said.

Information on the national affiliation of Ataturk's daughter immediately appeared on the front page of the national newspaper Hürriyet. This sensetional mews was reprinted by almost all the editions, and has long remained in the spotlight of Turkish media. It was argued that this was an Armenian provocation, but there was even more significant evidence besides the version of Hrant Dink. A linguist, an author of the largest explanatory dictionary of the Turkish language - Pars Tugladzhi told that Sabiha Gokcen knew about her real parents and even knew many Armenian words. "Sabiha spoke Armenian a bit which was an important evidence indicating her origin. Moreover, the famous aviatrix suffered the so-called "Yerevan's disease"," the teacher of history of one of the Turkish schools Kemal Merakly said, who knew Sabiha Gokcen.

Sabiha Gokcen died on March 22, 2001 and until the end of her life was devoted to her "father". The international airport of Istanbul is named after Sabiha. When the question of airport's name arouse, many Turks were outraged that the airport would be named after Armenian woman ...