Armenian Hakob Martayan - the Founder of the Modern Turkish Language 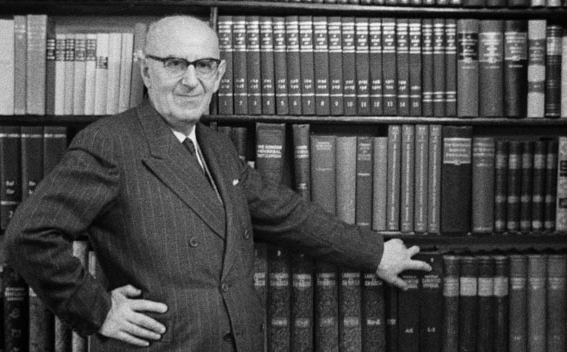 In Turkey, many prefer not to talk about the role of Armenians in the development of the Turkish state and Turkish culture. However, Turks cannot help talking about one of those Armenians. This is the founder of the modern Turkish language - Hakob Martayan, or as the Turks prefer to call him- Hakob Dilachar. When Kemal Ataturk decided to implement a reform of the Turkish language and translate the Ottoman-Turkish language (Osmanli) from Arabian into the Latin alphabet, he requested Hakob Martayan to do the job.

The choice of Ataturk, appears, was not accidental. An outstanding representative of Armenian nation, Hakob Martayan was born on May 22, 1895 in Constantinople (Istanbul). He studied at the American school of Istanbul (Robert College). Then he became an English teacher of that college, and later on, its director.

When the First World War began, Martayan was taken to the Syrian front - to fight against the British. As Martayan mastered English, the English prisoners asked him to pass the Turkish officers their request to stop violence against them. In response, the officers took Hakob to the commander as a traitor. Before hearing the order of the commander, he strongly affirmed that violence is characteristic only of Sultan's regime, rather than the republican system striving for progress. Perhaps this statement interested the commander as they continued the conversation. Since then, the fate of Martayan changed. Some time later Martayan lectured on public policy and about what the republic was to the above-mentioned commander, who later became the first president of the Turkish Republic. That's was him - Mustafa Kemal who charged Martayan in 1923 to reform the Turkish language – translating Turkish-Ottoman (Osmanli) arabic into the Latin alphabet. With this goal, in 1932, the Turkish Linguistic Society was created. As there were not enough linguists in Turkey, Kemal decided to invite Martayan to the Society. Settling in Ankara, Armenian linguist became an adviser to the president for the Turkish language, cultural and scientific issues.

In the years between 1936-1950, Martayan taught history of linguistics and general linguistics at the University of Ankara. He then had already been given a nickname Dilachar. It should be recalled that in 1934, Kemal signed the law on surnames, first ordering to give surnames to linguists and public figures (before there were no surnames in Turkey). At the same time Turkish linguists developed surname Turk Atasi for Mustafa Kemal, which was then changed by Martayan as Atatürk and till now Kemal is known as Atatürk. Since Martayan did have surname unlike the others, he was awarded a title of Dilachar by Ataturk, which in Turkish means "linguist".

Interestingly, Hakob Martayan is not only the founder of the modern Turkish language, but also the chief editor of Turkish encyclopedia. It should be noted that Martayan along with the Armenian and Turkish, mastered other 19 languages, including Greek, English, Spanish, Latin, German, Russian, Bulgarian etc. He is the author of many works, among which "Language, Languages and Linguistics", which refers to the Armenian, Old Armenian, Middle Armenian and New Armenian languages. It should be noted that until 1932 Martayan worked in Beirut, in Sofia and other cities, where he lectured Armenian studies. He was the director of the first Armenian school in Beirut. In Sofia, he founded the Armenian newspaper "Rahvira" and "Mshakuyt" ("Culture"). He was the editor of the weekly "Luys" in Beirut, hayazg.info reports.

Despite the anti-Armenian policy of the Turkish authorities, Martayan never concealed his origin, as evidenced by an interesting story: once in 1934, Mustafa Kemal Ataturk attended a dinner with dignitaries, during which he suggested that a representative of each nation sang a song in their own language. When it came to Hakob Martayan, some began to whisper that he would not dare to sing in a language other than Turkish. However, Hakob Martayan sang an Armenian famous song dedicated to the Armenian military leader Andranik.The guests at the table, having heard the word "Andranik", got confused, and Ataturk said: "Under the sounds of this song, many were ready to die for their nation. Listen to this song with respect." "Armenians are right by remembering their heroes," Ataturk said, adding though that the Turks this time won.

Hakob Martayan (Dilachar) died on September 12, 1979 in Istanbul, playing a huge role in the development of Turkish language and linguistics.