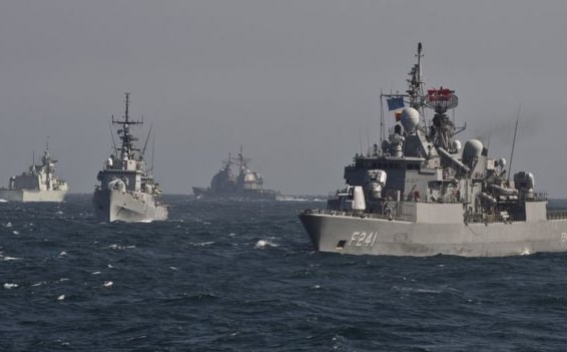 NATO Secretary General Jens Stoltenberg and the European Commissioner for Home Affairs, Migration and Citizenship Dimitris Avramopoulos today during the meeting in Brussels discussed the coordination of NATO and the EU in the fight against illegal migration.

The main flow of migrants from Asia and the Middle East goes to Europe through Greece. From the sea coast of Turkey they get to the Greek islands, from where they are sent to the mainland, and from there already to the countries of Central and Northern Europe.

NATO Navy ships on Sunday were ordered to go to the Aegean Sea and be ready to harmonize the operational plan, Greek media reported.

During his visit to Turkey on February 8, German Chancellor Angela Merkel and Turkish Prime Minister Ahmet Davutoglu agreed to involve NATO for the protection of the Greek-Turkish border in the Aegean Sea and the Turkish-Syrian border in order to control the flow of refugees and migrants.

The next day the official representative of the Government of Greece Olga Gerovasili stated that the Greek Prime Minister Alexis Tsipras opposed attracting NATO to patrol the Greek borders, this is possible only in Turkish territorial waters. According to her, the Greek Prime Minister said it is absolutely clear that any NATO involvement in the refugee problem concerns only Turkish territorial waters, thus the Greek sovereign rights and responsibilities will be provided. Proposal for joint patrolling was not put at all, Gerovasili said.

However, on February 11 the Minister of National Defence of Greece Panos Kammenos after the talks in Brussels said that "during the tough negotiations in the last 24 hours, in collaboration with Germany and other NATO member states, there was a general opinion of all NATO member countries under the agreement which, according to the minister, would completely change the situation, and finally solve the problem of migration. According տօ Kamenos, NATO forces will immediately send migrants back to Turkey.

The decision, first of all, considers that the NATO forces that are engaged in the Aegean Sea near the Turkish and the shoreline ensure that the detained migrants are sent back to Turkey, said the Minister.

According to him, the purpose of NATO forces is to stop the criminal activities of illegal transfer of people.

In addition, all Greece's partners fully respect the national sovereignty and borders, Kamenos said. According to him, it is clear that among the forces involved in the NATO group, Turkey will act only in Turkish waters and in Turkish airspace, and Greece in turn in Greek waters and Greek airspace.

At the second stage of the operation, NATO countries, that are also EU Member States, will begin to mobilize Frontex. According to Kamenos, after conversion of the Frontex into the European Border Guard Service, they will not act outside the Greek islands, but rather near the borders of Turkey.

According to the Party, the words that NATO's participation is limited only to the Turkish territorial waters, is only a wish because NATO does not recognize the borders between its members and supports the Turkish provocations in the Aegean Sea.

Concerns about the involvement of NATO in the operation are also expressed by political observers. According to them, it is not clear what the NATO ships will do with the boats of refugees and how they can be deployed and forced back on the Turkish coast if  there are about 50-60 people instead of 10 in boats.

At the same time observers have noted that Athens could block a decision as all NATO decisions are taken by consensus and achieve more favorable conditions for themselves.