The Results of Mogherini's Visit and Armenia's Expectations from the EU 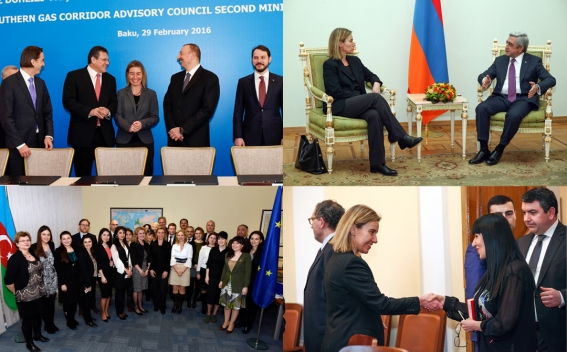 Federica Mogherini’s visit to South Caucasus, despite various assessments, can be seen done for strengthening the EU’s position in the region and reaffirming the existing agreements. Cooperation with the European Union does not hinder in involving in other blocs; Karabakh conflict should be solved within the framework of the OSCE Minsk Group and the EU supports the establishment of a mechanism for investigating incidents. These were the main messages of the regional visit of the EU High Representatives.

First, the ceasefire in Syria and the agreement reached between Russia and the West create a chance of "halt" for major powers, including the EU, to strengthen their positions in different regions. Russia-Turkey tensions and their desire to strengthen their position in the South Caucasus could be a strong signal for the European Union. Turkey has done everything possible for Azerbaijan to involve it in the coalition led by it and Saudi Arabia. In parallel Russia took steps to prevent Azerbaijan from taking the Turkish side. In addition, Russia started bringing its military base in Gyumri to high level of readiness, provided Armenia with new military equipment, as well as put into circulation the question of revising the Treaty of Moscow.

This, in fact, can be seen as direct and indirect steps to "rearrange the cards" in their own region, while Russia’s too much strengthening position in the EU’s neighborhood is being perceived as a threat.

Therefore, it was no coincidence that the EU High Representative hurried to visit the region and reiterated the willingness of the EU to develop close relations with each country, to create individual format and stressed that "the cooperation with European Union does not exclude cooperation with other international alliances."

Now let’s refer to the expectations of Armenia from the EU and particularly to those that were voiced during these meetings.

First: Last December, the EU started negotiations on a new legal basis. Armenia’s expectation is as a result of negotiations to receive a document close to the Association Agreement as much as possible, which will provide both political and economic cooperation. On the eve of the visit, the High Representative in an interview with "Mediamax" said the page of 2013 is turned, and the EU is now seeking to build a strong relationship with Armenia, irrespective of Armenia's membership in the Eurasian Economic Union and at the same time taking it into consideration. According to the Deputy Foreign Minister Karen Nazaryan negotiations with the EU are in three main areas: political dialogue and justice, economic, trade and investment.

Second: Armenia intends to proceed to the next stage of visa liberalization. Armenia has several times declared from a high level that it gives much importance to the progress of mobility, we have made our commitments at this stage and are looking forward to receiving the first part of the EU Action Plan.

Third: Promotion and support of reforms. Armenia has repeatedly stated at the highest level about its readiness to continue reforms in all directions. In this regard, the EU is expected to provide both technical and financial support. During her visit Mogherini stressed that Armenia attaches importance to the deepening of democratic processes, including elections transparency. Progress towards democracy, in fact, is the main prerequisite for the development of relations between the EU and Armenia.

Fourth: Armenia hinted about the importance of the EU’s support in hosting Syrian refugees and a number of problems in that connection. The EU representative, in part, said she appreciates the adopted policy of Armenia and its support in the migration crisis. In fact, the EU did not offer any financial support, instead promising to assist Armenia in engaging in programs on migration issues.

Fifth: Armenia expects to get the support for the EU within the fixed format on Karabakh conflict peaceful settlement. Mogherini stated that there is no alternative to a political settlement within the OSCE Minsk Group and stressed the importance of establishing mechanisms for investigating the incidents, which still fails as Azerbaijan refuses to agree.

Therefore, as a result of a series of dialogues at the highest level, the EU-Armenia relations show positive development trends. However, it is also a fact that this process needs greater accountability and transparency to regain confidence both between the parties and among the society. The EU is looking for individual formats, and at this stage our task is to contribute to the development of a more efficient format for us.