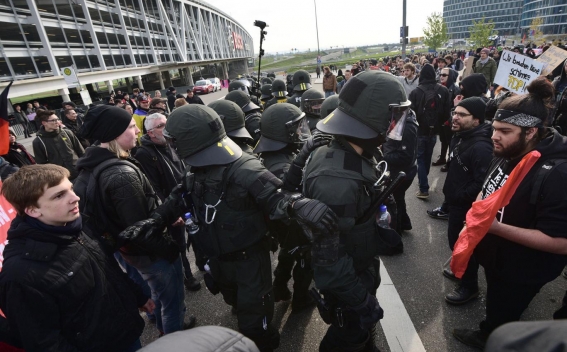 At least 400 people have been detained by police in the German city of Stuttgart during protests against the populist party, the Alternative for Germany (Alternative fur Deutschland). The protesters in Stuttgart were shouting slogans such as: "Keep refugees, drive Nazis away!" and "We'll get you all."

The matter is that this right-wing party has adopted an explicitly anti-Islam policy declaring it for the first time on Sunday. Delegates at a party conference adopted a ban on minarets, the call to prayer and the full-face veil, saying Islam was "not part of Germany".

Thus Merkel's Christian Democrats (CDU) and other established parties have ruled out going into coalition with AfD, Deutsche Welle reports.

So it is currently third in the national polls with 13 per cent support, behind Mrs Merkel’s Christian Democrats (CDU) and her coalition partner the Social Democrats (SPD).

It is noteworthy that at AfD's conference in Stuttgart it was even discussed by the leadership that border police should be empowered to shoot illegal migrants if necessary.

It should be recalled that this anti-Islam rhetoric came initially from Pegida, a mass movement that started in the eastern city of Dresden, then spread to other German cities.

Pegida regularly draws thousands of supporters at anti-immigration marches. Neo-Nazi groups are among the Pegida followers, who denounce "the Islamization of the West", BBC writes.

But it's not only Pegida and the AfD that are demonstrating today such ''Neo-Nazi'' approaches. We are witnessing today the rise of far-right and nationalist parties in many other European countries as well.

The results of most recent national elections in a number of European countries show the full picture of today's ''Nationalist Europe''.

In Switzerland, for instance, the Swiss People Party got 29% votes in general elections, the Freedom Party of Austria got 21% of votes, the same 21% also got Danish People's Party in Demark and Jobbik Party in Hungary.

''The Finns'' got 18% in Finland's recent parliamentary elections and the National Front of France in turn got 14% of general voting. 13% votes got Sweden Democrats and 10% - Freedom Party of Netherlands.

So currently the right-wing populist groupings shout anti-immigration and Eurosceptic slogans across much of the European Continent.

Of course, some of these political parties existed and enjoyed some popularity back in 2000, but what is very different now is that their ideas and approaches have become a real mainstream which may lead Europe to veering to the far right...