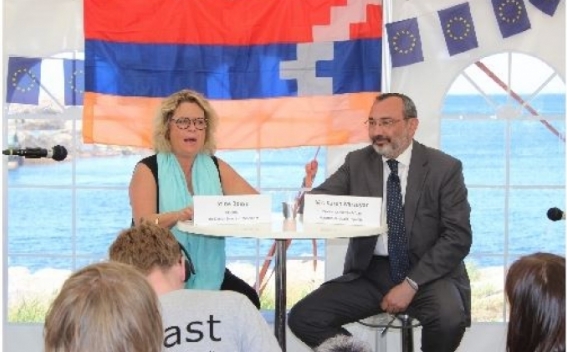 Minister of Foreign Affairs of the Nagorno Karabakh Republic Karen Mirzoyan, who is on a working visit to the Kingdom of Denmark, participated in the annual People s Meeting «Folkemødet» public forum in the Danish Island of Bornholm, official page of NKR Foreign Ministry reports.

On June 19, in the framework of the forum, Karen Mirzoyan delivered a speech at a meeting-discussion in the pavilion of the European Movement of Denmark chaired by the сhairperson of the organization Stine Bosse.

In his welcoming speech, the Foreign Minister stressed the importance of the meeting in terms of raising awareness about Artsakh in Denmark, as well as presenting the existing realities in the NKR and the position of Artsakh on international and regional issues.

Answering the numerous questions of the participants, the NKR Foreign Minister briefed them on a range of issues related to the national-liberation movement of Artsakh, the current stage of the Azerbaijani-Karabakh conflict, the achievements of the NKR in the state-building process, and the foreign policy priorities of the Republic.

On the same day, Karen Mirzoyan visited the Art Museum of the island of Bornholm. During the ceremony organized there, he handed over a sculpture by talented sculptor of Artsakh Hayk Hakobyan to Director Lars Kærulf Møller for the collection of the museum. In its part, the Bornholm Museum donated a work by Bornholm artist Lenny Goldemberg to the Shushi State Museum of Fine Arts. The sides exchanged views on the prospects of possible cooperation in  the spheres of culture and museology.