2016 Was a Year of Active Cooperation between Armenia and Iran 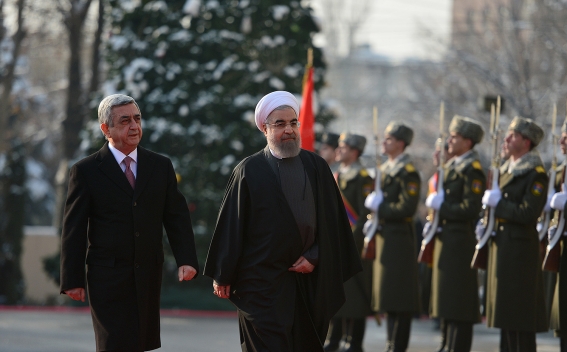 2016 was a year of active cooperation for the Armenian-Iranian relations in terms of deepening both bilateral and multilateral regional cooperation. The signing of the nuclear deal and the improvement of Iran-West relations contributed to the strengthening of cooperation in the region. Initiatives by Armenia and Iran aimed to bring trade and economic relations in line with the high level Armenian-Iranian political relations. And from this point of view the year of 2016 was really special, and it can be stated that significant progress has been made.

From the perspective of tourism promotion and development of trade and economic relations the most important evens of the year were the signing of Memorandum on lifting the visa regime between Armenia and Iran, the Armenia Expo 2016 exhibition and the last session of the Armenian-Iranian intergovernmental commission that took place in Iran, as well as the Armenia-Iran Business Forum which took place in Yerevan.

Energy and transport cooperation were in the center of the attention. The construction of the third part of the Armenia-Iran power line continues. The launch of Iran-Armenia-Georgia-Russia energy corridor, the Persian Gulf-Black Sea international transport and transit corridor, the possibility of joint investments in free economic zone on the border between Armenia and Iran, the increase of the Iranian gas supplies to Armenia, the possibility of transporting Iranian gas via Armenia to Georgia and other projects are in the phase of active discussions. Armenia supports negotiations between Iran and the Eurasian Economic Union to reach the signing of a free trade area agreement as soon as possible.

Referring to political relations between the two countries, it should be stated that the political cooperation continues to develop without any major obstacles. It is noteworthy that during the April war unlike Turkey, Armenia’s Southern neighbor Iran avoided expressing support to any of the conflicting sides. Iran’s position on April events as well as the Karabakh conflict in general is based on two key factors: positive neutrality and mediation initiative. Armenia appreciates the balanced position of Iran and its readiness to contribute to the peaceful settlement of the conflict, expecting that Iran, which has come out of international isolation, will contribute to the process of ensuring regional security.

On the other hand Iran-Armenia cooperation is one of the best examples of civilization dialogue that once again prove that religious and cultural peaceful coexistence is possible.