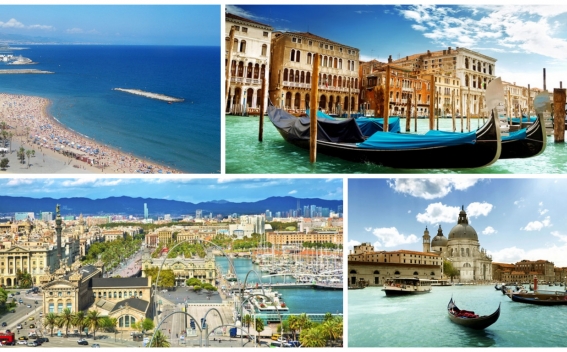 The most active season of tourism is already open, and while all the countries are thinking of attracting tourists, Barcelona and Venice are thinking how to fight the flow of tourists.

Thus, the population of Barcelona complains that the city has turned into an amusement park, which hampers their everyday life, especially because of the huge flow of tourists, and everything is quite expensive for locals. It should be noted that in 2016, more than 32 million tourists visited Barcelona, with a population of 1.6 million. Urban authorities have decided to fight tourism by reducing the number of hotels. Earlier in 2015, the authorities of Barcelona banned the construction of hotels in some parts of the city.

The Venice City authorities have also decided to install special devices to count the tourists visiting the city. "We have managed to develop a series of measures that aim to regulate the tourism flows and make them compatible with the daily lives of people living there," the Venice Mayor Luigi Brunuyo said.

According to him, the authorities also want to start an international information campaign to explain to foreigners why the city cannot stand a large number of tourists.

It is worth mentioning that in 2016, at Easter, 300 thousand tourists visited Venice, where the population does not even reach 270 thousand.