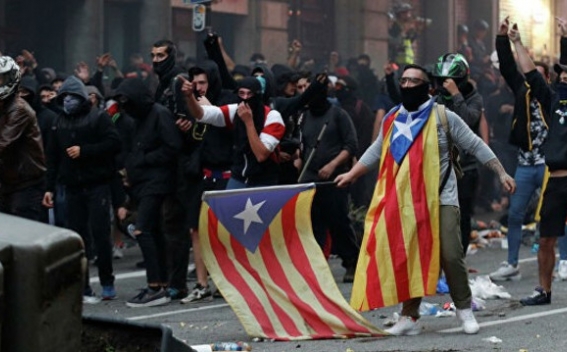 Hundreds of pro-independence protesters took to the streets of Barcelona for a seventh successive night on Sunday, with anger over the jailing of Catalan separatist leaders showing little sign of abating, Reuters reports.

One large crowd blocked a road close to the Spanish government headquarters in Catalonia, throwing dozens of sacks of rubbish in front of stationary police vans. A smaller group shut off a major avenue to the east of the city.

However, there was no sign of the violence that has shaken Barcelona in recent days, particularly on Friday, when masked youths set fire to hundreds of garbage bins and hurled rocks, stones and bottles at security forces.

“We are people of peace,” said a sign held up by demonstrators on Meridiana Avenue.

“The riots are diminishing, but we are working on stopping them altogether,” said Grande-Marlaska.

Barcelona Mayor Ada Colau said a policeman and a protester remained in a critical condition, adding that “several people” had been blinded in one eye by police rubber bullets.

Independence is a highly divisive issue in Catalonia, which is Spain’s wealthiest region and has 7.5 million inhabitants. A poll in July showed backing for secession at its lowest level in two years, with 48.3% of people against and 44% in favor.

One of the most prominent figures against self-determination, Albert Rivera, head of the pro-unionist Ciudadanos party, staged a counter-protest on Sunday and called for an end to the violence.