In Artsakh Minorities Presented Their National Dishes on Harvest Day 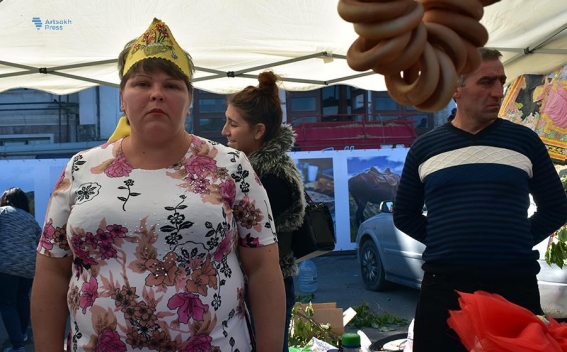 As "Artsakhpress" reports, for example, Sandik Sin Shalival, moved from India to Artsakh for a permanent residence a year ago, after he has got acquainted with Hasmik Danielyan on the Internet and got married to her. Now they live in Berdzor city of Kashatagh, in Artsakh. At the Harvest Day fair Hasmik and Sandik presented Indian traditional meals such as jelabi and milk cakes. Hasmik noted that Sandik eats Artsakh national dishes with pleasure, especially "Zhingyalov hats" (a type of flatbread stuffed with finely diced herbs and green vegetables).

Assyrian national dishes were presented by Karine Piroyev, a resident of Ishkhanadzor community in Kashatagh region, in Artsakh. She noted that she presented the type of Assyrian sweets, which is being prepared only on holidays.