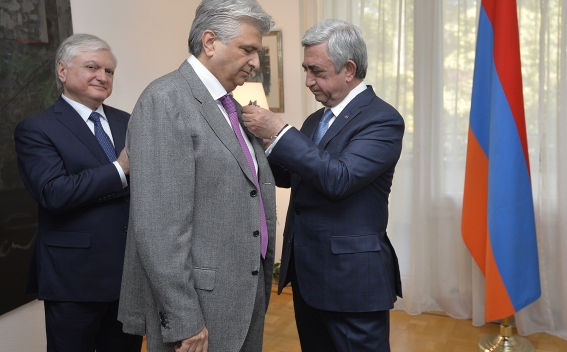 After the talks held with the President of Azerbaijan in Geneva on the initiative of the OSCE Minsk Group Co-Chairs, President Serzh Sargsyan met with the representatives of the Armenian community in Switzerland at the Embassy of the Republic of Armenia in the Swiss Confederation.

As with the traditional meetings held with local Armenian communities during the President’s overseas trips, Serzh Sargsyan first presented the purpose of his visit, the results of the talks and Armenia’s position in the Nagorno-Karabakh conflict settlement process. The President availed himself of the opportunity to speak about issues of pan-Armenian relevance and the strengthening of Armenia-Diaspora ties, as well as about those Homeland development-targeted efforts made by the Swiss Armenian community. In this context, Serzh Sargsyan emphasized that although the Swiss Armenian community is not so large, but it has an important and special place of its own among Diaspora communities.

In the presence of community representatives, the President of the Republic of Armenia handed high State awards to Swiss Armenian public figures Vardan Sirmakes and Albert Poghosyan.

On the occasion of Independence Day of Armenia, for valuable contribution to the development of Armenia’s economy, as well as for numerous charitable and public activities, Vardan Sirmakes was awarded the First Degree Order for Services to Homeland, while Albert Poghosyan was awarded the First Degree Medal for Services to Homeland for the strengthening of Homeland-Diaspora relations and numerous charitable and social activities.

The President thanked the Swiss Armenian public figures for patriotic activity and wished them every success in their future undertakings.