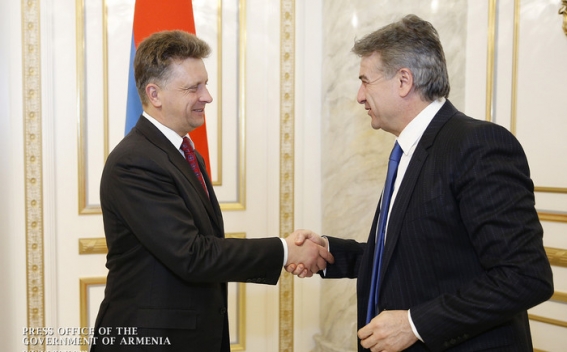 On October 25 the Prime Minister of Armenia Karen Karapetyan received Maxim Sokolov, RF Transport Minister and Russian co-chair of the Armenian-Russian intergovernmental commission on economic cooperation. This is stated on the official website of the Government of the Republic of Armenia.

As they discussed ways of furthering the Armenian-Russian relations, the interlocutors reviewed the work to be done in compliance with the agreements reached during Russian Premier Dmitry Medvedev's official visit to Armenia.

Prime Minister Karapetyan said some of the issues discussed during the talks might be included in the agenda of the intergovernmental commission so that specific steps could be taken to implement them. In particular, he evoked the ones related to Russian companies' involvement in the free economic zone to be launched on the Armenian-Iranian border. Maxim Sokolov advised that several Russian companies have already expressed interest in this project.

The parties also touched upon the establishment of the Armenian-Russian investment fund, the supply of agricultural equipment and a number of other issues.

The Prime Minister of Armenia thanked Maxim Sokolov for brining a modern electric train from Russia to Armenia. Karen Karapetyan and Maxim Sokolov expressed willingness to continue the ongoing effective cooperation and give fresh impetus to bilateral trade and economic relations.

The interlocutors agreed to hold the next 18th session of the Armenian-Russian intergovernmental commission as shortly as possible.