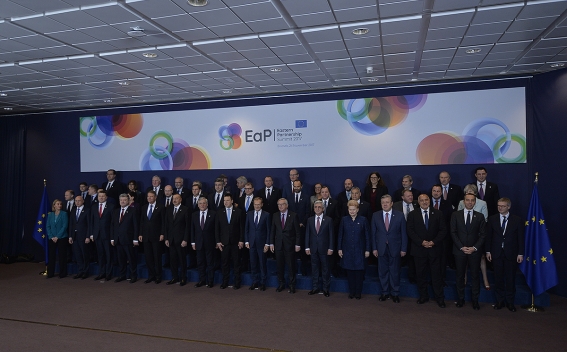 On November 24, the Eastern Partnership Summit took place in Brussels, as a result of which a Declaration was adopted summarizing the recorded achievements of the past two years. Besides, the Declaration also defined the ways of further development.

Below, we will separate those parts of the declaration that directly or indirectly refer to Armenia and the Armenian interests (mainly those parts, where Armenia is being directly mentioned). Those separated parts will be analyzed in comparison with the Riga summit declaration (2015).

There is no direct reference to Karabakh conflict in the document. The Declaration gives a general approach to the settlement of conflicts mentioning the importance of confidence-building and peaceful resolution welcoming the EU’s support to the existing negotiation formats.

"The Summit participants remain deeply concerned about the continued violations of principles of international law in many parts of the region. The Summit participants call for renewed efforts to promote the peaceful settlement of unresolved conflicts in the region on the basis of the principles and norms of international law. The resolution of conflicts, building trust and good neighbourly relations are essential to economic and social development and cooperation. The Summit participants welcome efforts and the EU's strengthened role in conflict resolution and confidence building in the framework or in support of existing agreed negotiating formats and processes, including through field presence, when appropriate," the Declaration reads.

In the context of Karabakh conflict the reference to building trusts and peaceful settlement within the existing agreed negotiating formats, is quite important. Besides, the emphasis on the EU’s field presence  and its role can be "used" to draw attention of the need of EU’s direct work in Artsakh on humanitarian issues.

It should be mentioned that the Riga summit Declaration directly referred to Karabakh conflict "reiterating full support to the mediation efforts by the co-chairs of the Minsk Group on the Nagorno-Karabakh conflict, including at the level of Presidents and their statements since 2009." With such wording the EU directly expressed its support to the 3 principles of Helsinki Final Act – non use of force or threat of force, territorial integrity and the right to self-determination, as well as to the Madrid principles.

The Brussels Declaration welcomes the signing of the Comprehensive and Enhanced Partnership Agreement between the European Union and Armenia in the margins of the Summit. The Agreement reaffirms that it is the sovereign right of each partner country to choose the level and goals of its relations with the EU. This means that the EU is ready to deepen its cooperation with Armenia.

In the Riga Declaration, the participants welcomed "the common understanding reached on the scope for a future agreement between the EU and Armenia aimed at further developing and strengthening their comprehensive cooperation in all areas of mutual interest."

This means that the negotiations have successfully gone forward and now Armenia is near signing the Agreement, which is a part of expanding and strengthening the communication links among the EaP countries and the EU.

The Brussels Declaration on the issue said: "They look forward to strengthen cooperation and further progress in the area of mobility, in a secure and well-managed environment and to consider in due course the opening of visa liberalisation dialogue with Armenia, provided that conditions for wellmanaged and secure mobility are in place, including the effective implementation of visa facilitation and readmission agreements between the Parties."

It should be reminded that the RA Foreign Minister has many times declared that Armenia is ready for negotiations over visa liberalization.

The Brussels Declaration fixes the EU’s commitment to develop trade relations with partner countries. The EU welcomed the implementation of the Deep and Comprehensive Free Trade Areas for the three partners concerned Georgia, the Republic of Moldova and Ukraine. It also mentioned that in a differentiated way, the EU will continue to jointly discuss with each of the partner countries, including Armenia attractive and realistic options to strengthen mutual trade and encourage investment to reflect common interests.

The Riga Declaration simply mentioned that the participants welcomed the importance of achieving a future agreement between Armenia and the EU that "will touch upon the development and deepening of comprehensive cooperation in all areas of mutual interest."

This shows that if in 2015 the EU was not convinced that it could develop and deepen trade relations with Armenia, the negotiations and the work done during these two years have shown that Armenia's membership to the EAEU does not hinder the development of trade and economic relations with the EU.

Summarizing, it can be mentioned that in some terms very general and compromising formulations were chosen in the Brussels Declaration. As for Armenia, in general, the document reflects a positive assessment of the great work done, overcoming the many uncertainties and the desire of both the EU and Armenia to move forward.