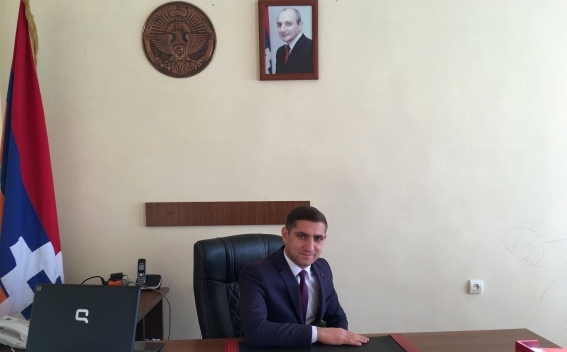 In the framework of the articles summarizing 2017, "Armedia" IAA  has talked with the young leader of Shahumyan region of Artsakh (Nagorno-Karabakh Republic), Harut Mnatsakanyan, referring to the works done in the region and the future plans.

- Mr. Mnatsakanyan, would You, please, summarize the works done by you in 2017? What were the main directions? What are the achievements you would like to indicate?

- Throughout the year little work has been done by my team taking into consideration the fact that I was appointed at the end of September, when, in fact, only few months were left till the end of the year. Still, in that short period of time, rather huge work has been done. They were in the following main directions.

First, the potential of the region for the region's development was revealed. Second, the diagnosis of the problems was made – which are the spheres with the main problems and what are the ways to resolve them?

First, it was the opening of Vardenis-Stepanakert-Martakert highway, the main part of which passes through Shahumyan region. It is impossible to undermine strategic, political and economic role of the highway. It has already become huge impetus for the development of the economy. New infrastructures, various public and other objects have been developed on the highway creating new job places and empowering the connections of the region both with Armenia and capital Stepanakert. It, automatically, results in the political, cultural development of the region as it is impossible to ensure the development of the region without active interactions. The fact that the great part of Yerevan-Stepanakert cargo transportation was carried out by this highway, is a serious indicator.

The second achievement, naturally, is the steps in direction of hydroelectric power station, in particular the opening of Jermajur hydro power station. In 2017, we already had around ten applications for building hydropower plants, for which the area was separated and the big part of the appropriate permits were given. It also means opening great number of job places, the increase of GDP of the region and the whole state.

Third, in 2017, the construction of water plant was completed and according to the preliminary plan it will start operating in 2018.

- For 2018 we have plans both directly for Sahumyan region, as well as state and business projects.

First, we are planning big construction works to ensure infrastructures. Second, we will ensure appropriate communication means for the region. Unfortunately, we have places in the region, where the Internet is still not available, in some places there are also problems with the connection. The overall region is not provided with gas. Although we do not expect providing all those places with gas in 2018, the infrastructures for gas supply will be installed in 2018. Works will be done for the construction of Vardenis-Karvachar short road, the part of which has already been completed. Another thing will be house construction process in overall region, especially for young families.

There are already a number of arrangements; some of them are already in use, such as the water plant which will be operated in spring of 2018. Due to the very plant we will have 40 new job places. In the sphere of construction, 15-20 job places are expected to be added. In the coming two-three years, the region will solve the problem of its job places. Afterwards, there will be issues with a new working force, mainly concerning the issue of having qualified specialists. Currently, due to “Ararat” foundation we realize the reconstruction works of the house of culture, which we plan to accomplish also in 2018. We will have a new constructed house of culture with its subsidiary buildings, workshops.

- What conditioned your decision to become a state official?

- I have worked in the social sphere for many years and had my participation in developing some public agenda issues and in various constitutional processes.  I have always come up with various initiatives, in the framework of which we have tried to realize our different ideas and to contribute to the development of the country.

According to the policy carried out by the President of Artsakh Republic, young people are trusted with responsible jobs. In the framework of it, I was appointed as an assistant to the head of presidential administration in June of 2017, afterwards, on September 26, by the order of the President, I was appointed the head of Shahumyan region. To tell the truth, it was unexpected to some extent, it is a serious responsibility and, naturally, I will do my best to justify that trust.

- Of course, no, in the traditional societies, where the absence of experience is viewed very negatively, it is hard for many members of the society to admit a young official. The lack of experience, certainly, is accomplished by hard-work, the desire to study and enthusiasm.

Of course, along with its negative sides, there are positive sides. The main advantage of a young official, which I would like to mention, is the ability to dream and recognize no borders. When there is a problem, which has not been solved for many years and we discuss it, everyone says that it cannot be resolved. However, the youth are of another opinion. We do not have to admit the situation; we have to dream, which gives us power.