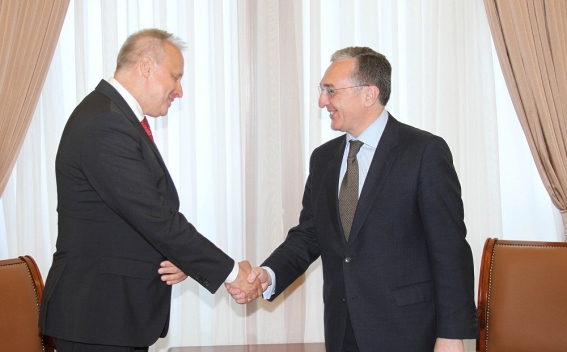 The Armenian FM expressed hope that he will contribute to the further deepening and expansion of the Armenian-Russian allied relations during his mission. The Russian Ambassador assured that he will invest the maximum efforts not only to ensure the continuation of the Armenian-Russian traditional friendly relations and strategic mutual partnership, but also to further develop and deepen them.

Minister Mnatsakanyan and Ambassador Kopyrkin discussed a number of issues relating to the Armenian-Russian agenda, as well as touched upon the timetable of upcoming high-level mutual visits in the context of the recent meeting of Armenian Prime Minister Nikol Pashinyan and Russian President Vladimir Putin.

The Armenian FM highly appreciated the joint efforts of Russia, France and the US as OSCE Minsk Group Co-Chair countries, aimed at peacefully settling the Nagorno Karabakh conflict, by attaching importance to the existence of the peaceful environment for the success of the process, reports ''Armenpress''.