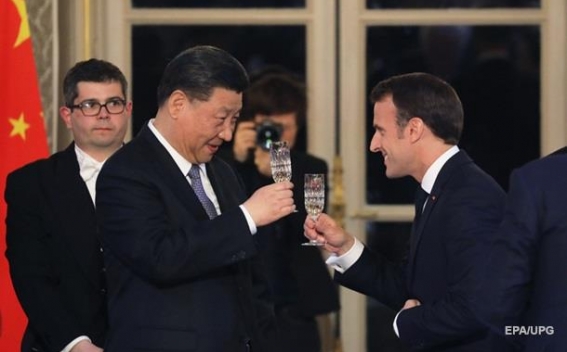 China’s president Xi Jinping summed up his visit to Western Europe last week in France’s capital Paris. In the talks with France’s Macron agreements were reached on € 40 billion  Chinese investment in France and the Union.

Namely on March 25 the heads of two states signed about a dozen of agreements on airliners, frozen poultry supply, nuclear energy and environment.

Chinese authorities make explicit efforts to strengthen ties with Europe. The visit to France came after Xi Jinping’s visit to Italy, which resulted in Italy’s membership in The Great Seven and its becoming the first EU state to express willingness to join the Chinese Belt and Road initiative. The evidence is the memorandum of understanding, as well as 29 trade agreements concluded between the two countries, worth € 7 billion.

It is noteworthy that against the backdrop of European leaders’ condemnation of Italy another key EU country, France concludes agreements with China of more worth.

Following the Greek crisis that had its imprint on the EU economy, the EU leaders face the urge to promptly address issues and maintain the stability of the Union. The painful Brexit process has made the EU economic capability issue even more vulnerable. Against this backdrop the EU can suffer an outside blow from a third country’s presence inside the Union. China’s concluding agreements with EU states separately, however positive they might be investment-wise, in fact shakes the Union’s economic basis by making them dependent. This is one of the reasons for reservations against the Chinese Belt and Road initiative. Merkel said about the initiative, “We, the European people, wish to have a role in it. However, mutual understanding should come from both sides and as of now we face difficulties in searches for it.”

The European concerns and jealousy resulted in quadrilateral meeting between Xi Jinping, Macron, Merkel and Junker.

A new Chinese-European tandem against the US

The latter is evidenced by issues discussed at the quadrilateral meeting, such as improvement of the WTO, combining efforts to develop new mechanisms for the Paris Convention on Climate Change. Noting the need for changes in those directions, the sides clarified some of the issues on the EU-China Summit agenda to be held on April 9.

Among the issues to be discussed at Chinese-European summit are mutual guarantees of foreign investment, as well as the opening of the Chinese market for European companies.

China is consistent in their policy about this. It is no coincidence that before the European tour, a new law on foreign investment had been adopted in that country which substantially simplifies the procedure of foreign capital inflow into China.

In this light and given the upcoming summit it is expected that Europeans will be the first “to take advantage” of the law.

Given China’s prolific presence in the global economy, consistent efforts in reinforcing cooperation with Europe as well as the complicated situation in Europe one can expect EU-China relationships quality changes. The European confrontation to this almost undeniable fact and control of situation, at least as of now is possible by being open to Chinese initiatives, which sounds to be a reasonable decision on part of the European leaders.