The Monument to Komitas Has Been Opened in Saint Petersburg 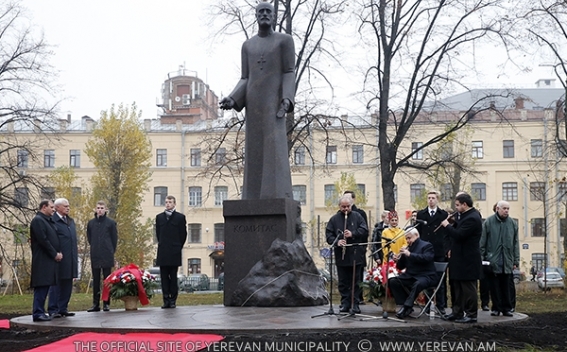 Yerevan Mayor Taron Margaryan who is in Saint Petersburg with an official visit together with the Governor of the city Georgi Poltavchenko took part in the ceremony of opening of the monument to the founder of the Armenian national classic music, the great composer Komitas. The Ambassador Extraordinary and Plenipotentiary of the RA to Russia Oleg Yesayan, the General Consul of Armenia in Saint Petersburg Hrayr Karapetyan and the leader of Yerevan Municipality representation Armenak Karapetyan, representatives of local Armenian community, numerous residents of Saint Petersburg were also present at the event.
Before unveiling the monument Governor Georgi Poltavchenko in his greeting speech stressed the importance of the Armenian-Russian centuries-old friendship noting that the erection of the monument in Saint Petersburg is another evidence of indissoluble bonds of friendship between the two peoples, particularly taking into account the significance of Komitas Vardapet for Armenians.

''It's not accidental that the monument to Komitas Vardapet is erected in Vasileostrovski administrative district as a lot of Armenians has been living here for a long time. Placement of the monument to world-known composer in Saint Petersburg considered to be a cultural center is natural. Komitas is the genius son of Armenian people, a man who spread Armenian music in many countries. His culture fascinated many musicians throughout the world'', said Georgi Poltavchenko.
In his greeting speech the Ambassador Extraordinary and Plenipotentiary of RA to RF Oleg Yesayan in his turn expressed gratitude to Saint Petersburg Government for the willingness in placement the monument to Komitas in Saint Petersburg, pointing out that it symbolizes the many-year friendship between the two peoples.
''As Mr Governor has rightly noted Komitas is world-famous and his art has no limits. It's one more evidence of friendship and brotherhood between the two people which has got a firm ground today'',said Oleg Yesayan.
The Chief Architect of Yerevan Tigran Barseghyan also made a greeting speech. In person of Yerevan Mayor Taron Margaryan and Saint Petersburg Governor Georgi Poltavchenko he particularly thanked ll the persons in charge of the two cities whose efforts made it possible to create the monument and to erect it in the northern capital of Russia.
''And it's noteworthy that the ceremony of erection the monument to the Great Genius symbolizing Armenia is taking place within the frames of the centennial of the Armenian Genocide. It's an action of gratitude to the composer,ethnographer, scientist, singer, teacher, orator, poet, the founder of the Armenian classic music, of the national composing school. Numerous spiritual and material values have been created with the aim of evaluation of Great Komitas particularly in the areas populated by Armenians. His monuments and busts placed in different countries prove that Komitas is not only an Armenian value. He belongs to the world, he is a human value. And I think, I won't be mistaken if I claim that this city so rich in cultural values has been enriched with this monument made with big sophistication, which has made the relationship between the two people warmer handing down this solid friendship to generations'', said Tigran Barseghyan.
The honour of opening this monument in Kamski park in Vasileostrovski region of Saint Petersburg was given to Yerevan Mayor Taron Margaryan and to Saint Petersburg Governor Georgi Poltavchenko. The ceremony was followed by live performance of world-famous duduk player Jivan Gasparyan. Afterwards the clergy of the Armenian Apostolic and Russian Orthodox Church served the ritual of blessing the monument to Komitas. The participants of the event put flowers at the monument.
The monument is of 3.3 meters height and 1.7-meter pedestal made of granite. The author of the monument is the member of the Union of Artists of Russia, Docent of Saint Petersburg art and industry academy Levon Beybutyan, the architect is Maxim Atayants.