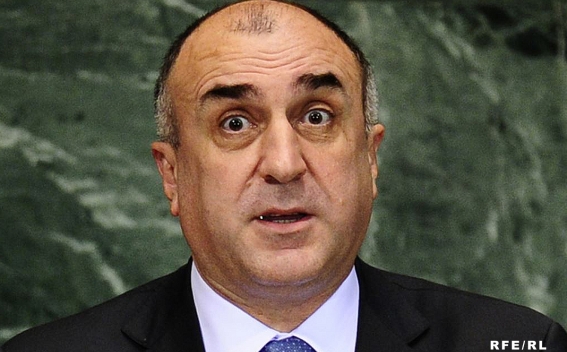 It turns out it is very easy to get the minister of foreign affairs of Azerbaijan, Elmar Mammadyarov, out of himself. The five-minute briefing with the Armenian journalists showed to what extend the foreign minister of this country is confined in his vision of the Karabakh conflict and how far from the desire to really find ways to solve this problem. A person who is really trying to resolve a problem cannot engage in “demagogy”, blaming others for this.

“Azerbaijan is flatly against that Karabakh takes part in the talks."

This idea in Brussels, in response to a question from Radio Azatutyun, unveiled Azerbaijani foreign minister Elmar Mammadyarov. And here all the rest said is unnecessary because to be "flatly against the engagement" of Karabakh in the talks on its future means to ignore the whole essence of the conflict and put an end to the possibilities for its real settlement. Not talking to Karabakh about the Karabakh conflict is like living in the kingdom of crooked mirrors, trying to find other actors there. How long will the leadership of Azerbaijan continue to feed itself and its people with the illusion that there is no Karabakh?

"All these years that we have been negotiating, the co-chairmen, visiting the region, also traveled to Karabakh and communicated with representatives of the Armenian community of Karabakh.”

"I believe that the key to the issue is not to participate or not to participate, the question is that we must demonstrate a serious political approach ... Everybody knows perfectly well, what document is on the talks table, why should we deceive ourselves?"

And who is deceiving themselves, Mr. minister? Everyone knows that the key topics of the talks are status, refugees, territories. Why don’t you tell the Azerbaijani journalists about it loudly? And without deceiving yourselves, because history does not know examples when a de-facto for 30 years independent state would negotiate about something, but not about its status as an independent state.

You may not understand this. But not everything in this world is measured materialistically - the amount of oil or black caviar, pipelines or gas corridors. There are more important things: a national idea, victory, a sense of pride, heroes ... However, perhaps you really do not understand these things.

In response to the question "What did Azerbaijan get?" Mammadyarov answered, “The railway bypassing Armenia opened, the gas pipeline was built? Isn’t that enough? All the strategic projects we talked about today, they all bypass Armenia ... Ask yourself the question: what did ordinary citizens of Armenia get from the conflict with Azerbaijan "If I'm not mistaken, you have 40% poverty rate."

Of course, it is not proper for the foreign minister of any country to overlook the "own log in the eye", but still ... "The poverty rate is 40 percent," but for some reason people in Armenia and Karabakh receive the same salary as in oil-dollar-rich Azerbaijan. Armenians are happier - the world statistics speaks evidences. And, despite all the declared economic preferences, Azerbaijanis, on the average, do not live better than Armenians, and Azerbaijani refugees have only recently been moved from miserable wagons to apartments. Strategic projects are not temporary pipelines. Strategic projects are democracy, human rights, civil identity.

"When we talk about preparing nations for peace, revealing a number of details we talked about, first of all, it refers to preparing Armenia for peace, so that there is no fraud, so that we understand that good neighborliness is better than staying in the blockade. Your border with two of the four neighboring countries is closed, and the third will soon be closed. Think, ask yourself the question, we don’t have to ask you, and you, the Armenian people have to ask themselves this question: what will happen next? "

Next you will rethink. Firstly, the Armenian people do not need to be prepared for peace. We are always ready for peace and it is not us who yell about war every day. Secondly, you, the Azerbaijanis, need to be prepared for peace. Because you - even at the level of the minister - have not yet learned how to speak in a civilized manner and without threats. You have not understood that it’s a shame to pretend to keep Armenia in blockade. You have not realized that punishment is the response to threats and force. You have lost some of your territories without understanding that this is a consequence of your policy of hatred and bury your head in the sand. It's been 30 years, and you have not changed. And all your pipelines and "strategic projects" did not yield the necessary result, ​​a sense of statehood, political wisdom, and readiness to resolve a conflict with former citizens. You complain at the corner. What will happen next? You will remain at that corner if you are not willing to accept the real picture of the Karabakh conflict. The world will accept the reality, even if it takes years. We will build an even better state in Karabakh than it is today. And you? Now think, what will happen next?