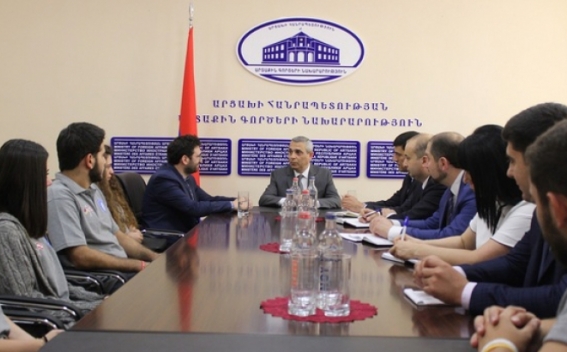 On June 11, Minister of Foreign Affairs of the Republic of Artsakh Masis Mayilian received members of the Student ‘Heritage Club’ of Haigazian University of Lebanon led by Director of the Student Office of the University Razmik Kapriyelian.

Masis Mayilian welcomed the members օf the delegation and expressed his satisfaction with the dynamically developing cooperation between the Ministry of Foreign Affairs of the Republic of Artsakh and Haigazian University established in 2018. The Foreign Minister noted the importance of maintaining and further deepening the mutually beneficial cooperation.

During the meeting, Masis Mayilian answered the questions of the students on the process of international recognition of the Republic of Artsakh, the peaceful settlement of the Azerbaijan-Karabakh conflict and the role of the Diaspora in promoting the issues of Pan-Armenian significance.

The students of Haigazian University gifted books on history and philosophy to the library of the Foreign Ministry of Artsakh.