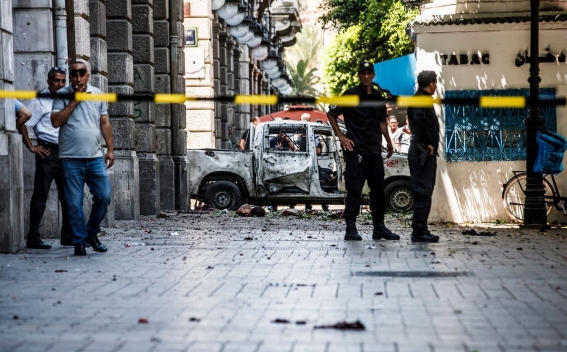 In the first attack, a police patrol car was targeted near the French embassy in the centre of Tunis at around 11am.

A police officer was killed and three civilians were wounded in that blast.

Body parts were strewn beside a pockmarked vehicle on the corner of Rue Charles de Gaulle and Habib Bourguiba Avenue in the city centre near western hotels.

It was around 100 yards from France's embassy, The Sun reports.

At the same time as the first attack, a second suicide bomber struck one of the entrances of the headquarters of the government's anti-terrorism brigade, on the outskirts of the city.

Four police officers were wounded in the second attack and heavily armed police cordoned off streets throughout the city.