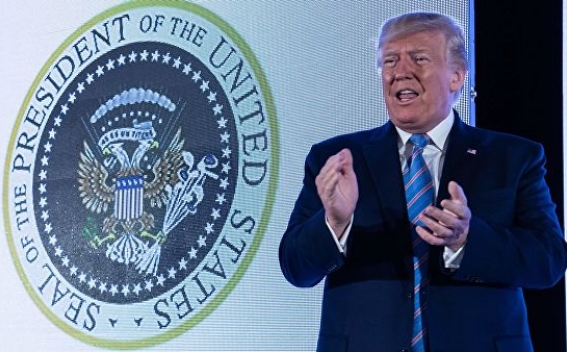 At a student summit hosted by the conservative group Turning Point USA, President Donald Trump stood before what looks, to the casual observer, very much like the US presidential seal. A thorough examination by the Washington Post, however, reveals some odd tweaks to the image, The Guardian reports.

First, the eagle has not one but two heads – making it look a lot like Russia’s coat of arms. And instead of holding arrows, as the bird does in the US seal, it’s holding golf clubs.

In other words, a proud presidential symbol was apparently reworked to shame Trump over two of the biggest targets of anti-Trump criticism – Russian involvement in the 2016 election and excessive golfing – and it was displayed behind the president for all to see.

How this happened remains a mystery. The Post spoke with a White House representative who said officials hadn’t seen the image in advance. A spokesperson for Turning Point USA, meanwhile, told the paper he was stumped as to the origins of the image, characterizing it as “a last-minute A/V mistake”. “I can’t figure out who did it yet,” the spokesman said, adding that he didn’t know where the image had come from.