Artsakh will Never be Part of Azerbaijan: Serzh Sargsyan 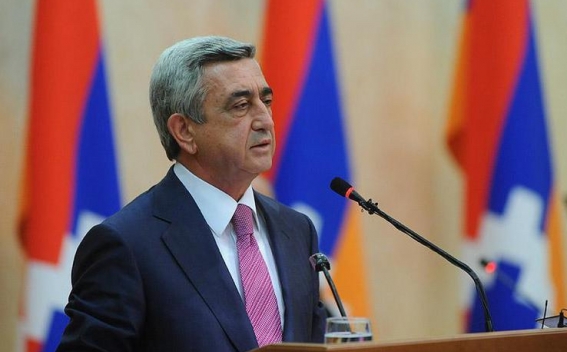 Armenia’s third President Serzh Sargsyan issued a congratulatory message on the 28th anniversary of the proclamation of the Republic of Artsakh celebrated on 2 September.

The message reads, in part:
"Dear Compatriots,
I congratulate us all on the 28th anniversary of Artsakh’s Independence Day.
September 2 is a pan-Armenian holiday, a symbol of national solidarity that every year rallies Armenians worldwide around its glorious victory and dignity. At the same time, it is a subject of our daily reflections on Artsakh as we have spared no effort for the sake of its empowerment.
There are many testimonies of pan-Armenian care and love in Artsakh that were created over the past three decades: roads, schools, kindergartens, cultural centers, churches, apartments... This was made possible owing to the funds collected by our compatriots at home and abroad with the earnest desire to see a free and independent Artsakh as early as possible.
Artsakh initiated its irreversible course 28 years ago, feeling the power of unity of thousands of Armenians rallied in Yerevan’s Freedom Square and in many Armenian cities around the world.
In no case should we allow the impairment of all-Armenian unity over the Artsakh issue. Today it is as dangerous as it could have been during the war. Not realizing it means endangering the Homeland for the sake of personal, political or other transient interests.
Today, I would like to congratulate my combat friends, including the incumbent president of the Republic of Artsakh Bako Sahakyan and Artsakh’s previous leaders.
Distinguished President Sahakyan,
Please forward my congratulations to the Speaker of the Artsakh National Assembly, the State Minister, to all those who have made a valuable contribution to the establishment and development of the Republic of Artsakh; to all those heroic boys who risked their lives in the battlefield defending their legitimate right to free and independent life in their historic homeland.
Glory to them! I bow down to the glorious memory of our fallen heroes, since only those nations who value their heroes can hope for future victories.
Today as well, our children are performing their sacred duty with the same dedication on the state border of Artsakh, defending the independence gained at the expense of the lives of their fathers and grandfathers.
God bless and save our children!
As I have said for years, I want to reiterate today that Artsakh will never be part of Azerbaijan.
On our national holiday, I wish Artsakh peace, stability, prosperity and further success in its state-building efforts."
Հայերեն На русском