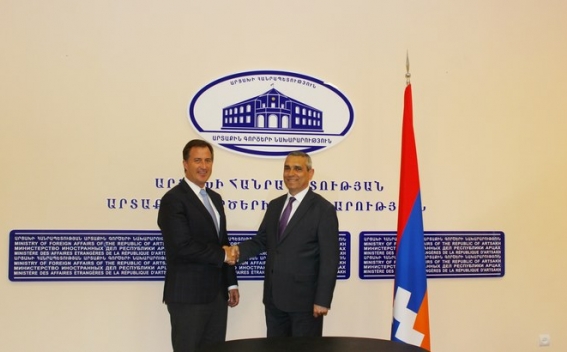 The Foreign Minister of Artsakh welcomed the traditional visits of the Assembly’s delegations to Artsakh, which provide an opportunity to get the complete picture of the realities and achievements of the Republic. Masis Mayilian highly appreciated the cooperation with the organization and stressed the importance of the AAA activities aimed at raising awareness of Artsakh and consistently promoting the Pan-Armenian interests in the United States, including actively contributing to the allocation of financial assistance to Artsakh by the U.S. Government.

At the request of the guests, the Foreign Minister presented the main directions and priorities of the foreign policy of Artsakh, touched upon the processes of peaceful settlement of the Azerbaijan-Karabakh conflict and international recognition of the Republic of Artsakh.

During the meeting, the sides discussed a range of issues related to the strengthening and further development of the cooperation between the authorities of Artsakh and the Armenian Assembly of America. Masis Mayilian answered the questions of the participants of the meeting related to the state-building process, the recent elections to the local self-government bodies, as well as the upcoming presidential and parliamentary elections in the country.