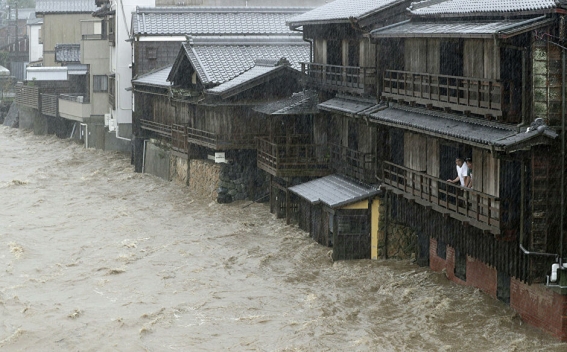 A man in his 50s was found dead in an overturned car in Chiba Prefecture near Tokyo, possibly hit by a tornado formed during the course of Typhoon Hagibis, which also ravaged several houses, local government officials said.

According to information provided by rescuers and other authorities, at least 50 people were injured in the prefecture and elsewhere in the country.

The agency has already issued an emergency warning in the afternoon, saying heavy rainfall "with a level of intensity observed only once every few decades" is predicted in Tokyo and the six surrounding prefectures of Gunma, Saitama, Kanagawa, Yamanashi, Nagano and Shizuoka.

Typhoon Hagibis, meaning "swift" in the Philippine language Tagalog, could possibly bring rainfall amounts not seen since a deadly typhoon in 1958, the JMA said.

The agency has downgraded Typhoon Hagibis' intensity to "powerful" from "very powerful." As of 6:00 p.m. local time, it had an atmospheric pressure of 955 hectopascals at its center and was packing winds of up to 216 km per hour.