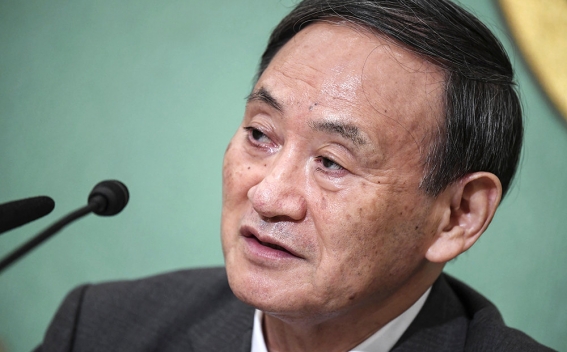 The faithful lieutenant has — against initial expectations — taken a major step toward the pinnacle of his political career, JapanTimes reports.

Yoshihide Suga, the chief Cabinet secretary, won by a landslide in the Liberal Democratic Party presidential election Monday, becoming the presumptive successor to Prime Minister Shinzo Abe. Suga is expected to take the helm at a critical moment when the country has been hit by a pandemic and economic slump and is grappling with national security issues.

Of 534 votes — 393 LDP lawmakers and 141 party representatives from across the country — Suga won by a wide margin, capturing 377 votes, or 70 percent. Policy Council Chairman Fumio Kishida secured 89 votes, and former Defense Minister Shigeru Ishiba received 68. The LDP has a comfortable majority in the Lower House, essentially guaranteeing that Suga will become the prime minister Wednesday.

The result is the culmination of a mere weeklong campaign to choose the country’s next leader, who Prime Minister Shinzo Abe himself imagined would be Kishida and the public initially wanted to be Ishiba.

Instead, the victor was Abe’s loyal right-hand man, even though he had trailed behind in the polls a few months ago. But Suga shot to the top of the pack after mainstream LDP factions quickly formed a consensus and the public, shocked by Abe’s announcement of his departure, apparently had second thoughts about the current administration and preferred continuity over an abrupt policy shift, according to recent polls.

Suga, clad in a navy blue suit with a yellow tie, showed his appreciation for Abe’s work as the prime minister after the vote at a joint plenary meeting of LDP members at a Tokyo hotel.

“We need to inherit and facilitate policies promoted by Prime Minister Abe in order for us to overcome this crisis and for each and every individual to have a safe and stable life,” Suga said. “I recognize that I carry that mission.”

Suga, who is the son of a strawberry farmer from Akita Prefecture and started his career in politics as a secretary of a Lower House member, has had plenty of media exposure throughout his tenure as the chief government spokesman, which sees him give a media briefing twice a day, five days a week and on emergency occasions. His big break came last year when he unveiled the name of Japan’s new imperial era, earning him the nickname “Uncle Reiwa.”

Still, he was not previously considered to be a viable successor to Abe. The prime minister was attached to Kishida and lauded him in the public to lay the groundwork for his ascension to the country’s top job. Even when pestered by the media, Abe’s No. 2 stubbornly brushed off speculation that he had any desire to be prime minister. Polls from earlier this year showed Suga only had single-digit support from the public.

The tide changed this summer when Abe visited a hospital twice and a resulting rumor about his deteriorating health condition caught Nagatacho, Japan’s political center, off guard.

Suga, known for his sullen manner and penchant for sticking to the script, began frequently taking interview requests, and Abe characterized Suga as “one of the hopefuls (as a successor)” in an interview with a right-wing monthly magazine. The prime minister was believed to be disappointed with Kishida for dropping the ball in coordinating the LDP and its coalition partner Komeito on the issue of a cash handout in April as part of a coronavirus economic rescue package.

After Abe announced he would be stepping down, citing a chronic illness, on Aug. 28, LDP factions rushed to find a successor. Secretary-General Toshihiro Nikai, who was tasked with deciding procedures on the LDP presidential election, backed Suga and decided to carry out a downscaled contest, bypassing rank-and-file votes in a crushing blow to Ishiba.

Following the move, party factions one after another jumped on the bandwagon to preserve their influence over Cabinet posts and agenda-setting authority. Suga himself does not belong to a faction, something he touts as an advantage but which raises the concern that he might be dragged into a factional power struggle.

“In picking Suga, I think Nikai may be using the time-honored LDP tradition of choosing someone with a relatively weak independent power base in the party who can be trusted to do one’s bidding when the time comes to decide who gets which prestigious post in the party and parliament,” said Amy Catalinac, an assistant professor of politics at New York University.

“Because a leader with a relatively weak power base would have only gotten to this position because of the votes supplied by the powerful (factions), he will do their bidding, knowing that if he doesn’t, they’ll withdraw their support and he’ll be replaced.”

“He represents a continuation of the Abe administration’s managerial stability, but also simultaneously represents a stark contrast from Abe himself, in that he doesn’t come from the privileged dynastic background typical among so many LDP politicians,” said Daniel M. Smith, an associate professor of comparative politics at Harvard University. “And (he) has so far largely avoided the kinds of controversial actions and statements that might pin him as a right-wing nationalist and distract from his governing priorities.”

Suga is set to enter the Prime Minister’s Office and form a new Cabinet on Wednesday with the expectation that he will deliver on his promise to double down on policies inherited by his predecessor, such as Abenomics.

At the same time, Suga has made clear he will bring to the forefront his own ambitions, some of which have been seen under the Abe administration, including tightening his grip on the bureaucracy, pressing on with digitalization and reinforcing initiatives to spread resources to areas outside major metropolitan areas through tourism and agriculture.

He has already expressed interest in expanding the national health insurance system to cover the cost of infertility treatments, as well as furthering his aspiration to bring down cell phone bills among the three carriers that dominate the domestic market — or slash the radio spectrum user fee altogether.

Much focus will be on the new Cabinet’s lineup — whether to keep critical posts such as finance, foreign, defense and internal affairs the same as in the Abe administration and who the new chief Cabinet secretary will be — as well as the prospect of a snap election, which would be the first major test for Suga to demonstrate his aptitude as a long-term, trustworthy LDP leader capable of filling Abe’s shoes.

“The prime minister will be leaving in the middle of his tenure due to illness. However, we’re facing a national crisis due to the spread of the coronavirus and we can’t condone a political vacuum being created,” Suga said. “I pledge to dedicate everything I have to working for Japan and for the people.”