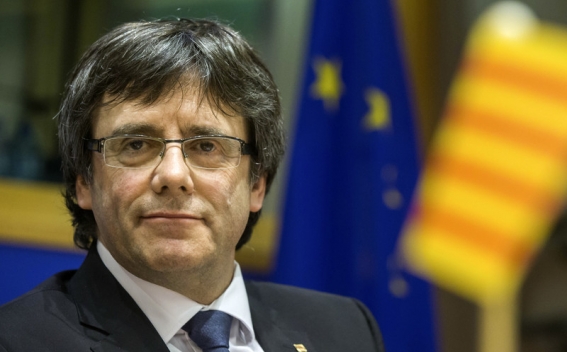 Carles Puigdemont, the former Catalan president sought by Spanish courts over his role in the region’s failed independence bid, has been released on bail after testifying before judicial authorities in Belgium in response to the reactivation of an international arrest warrant against him this week, The Guardian reports.

News of his court appearance came as Catalonia braced itself for a general strike and a huge demonstration in Barcelona after a fourth night of violent protests triggered by the jailing of nine pro-independence leaders by the Spanish supreme court on Monday.

Puigdemont, who led the region between January 2016 and October 2017, fled to Belgium to avoid arrest after being sacked by the Spanish government for staging an illegal referendum and making a unilateral declaration of independence two years ago.

In a statement, Puigdemont’s office said: “[Carles] Puigdemont, accompanied by his lawyers, has appeared voluntarily before the Belgian authorities in response to the European arrest warrant issued by the Spanish supreme court.”

It added that he was complying with the warrant but remained opposed to being extradited.

Puigdemont’s lawyers said he was ordered to remain in Belgium but could seek permission to travel abroad.

The former president told reporters waiting outside the prosecutor’s office in Brussels that he did not fear justice “from a fair court”.

Spain’s supreme court reissued the warrant – on charges of sedition and misuse of public funds – after Puigdemont’s former vice-president and eight other independence leaders were jailed for the same offences on Monday.

A member of Puigdemont’s team told the Belgian daily Le Soir that Puigdemont had decided to go to the police “on his initiative”.

Spain filed the European arrest warrant to Belgian authorities on Tuesday. Belgium’s federal prosecutor insisted the Spanish refile it in one of Belgium’s three official languages – French, Flemish and German – or English. The translated document had been expected to arrive next week.

Belgian lawyers had warned that the procedure was long and slow, especially if contested by Puigdemont’s lawyers.

The former president has so far managed to avoid extradition from Germany and Belgium. One of the complications is that Belgium does not have have an equivalent offence of sedition.

Spain’s supreme court said that although Puigdemont was elected as a member of the European parliament in May, he could not claim parliamentary immunity as he had neither taken up his seat nor sworn on the Spanish constitution – a prerequisite under the country’s electoral rules.