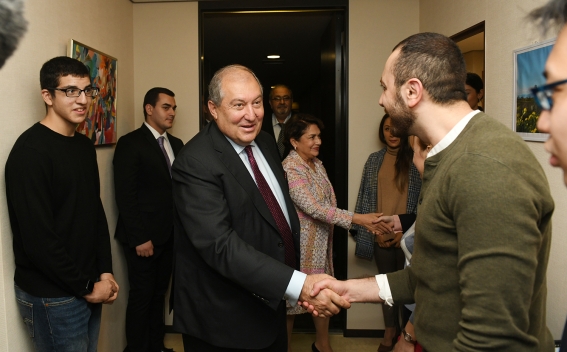 President Armen Sarkissian has met with the Armenian community of Japan within the framework of his visit to the country, Armenpress repots.

Together with First Lady Nune Sarkissian, the President spoke with the representatives of the community about their activities, and also briefly presented the result of his official meetings and agreements reached in Japan. The Sarkissians earlier participated in the enthronement ceremony of Emperor Naruhito and also had meetings with officials and business executives. A meeting with PM Shinzo Abe also took place last week in Tokyo.

“We also have lots to learn from the Japanese in the public service sector, because the discipline and devotion which they have truly causes admiration,” the Armenian President said.

He told the community that the greatest national wealth is the people, and that “this resource must be maximally utilized”.

“We have brilliant people, fantastic people who have achieved great success in various sectors in different parts of the world, and it is time for us to utilize their potential,” President Sarkissian said.

The Sarkissians also visited one of Japan’s ancient cities – Kamakura, his office said. There, he visited the Kotoku-in Temple and viewed the monumental bronze statue of Amida Buddha. He then traveled to Hōkoku-ji Temple, aka the Bamboo Temple, a reference to its famous bamboo gardens. The Armenian President and First Lady participated in a traditional Japanese tea drinking ceremony in the temple. The Sarkissians also visited the Tsurugaoka Hachimangu Shrine, an 11th century Shinto temple which is considered an important cultural center and a historic site.

A prayer was delivered at the shrine dedicated to the Armenian-Japanese friendship.

The Armenian President said the Armenian and Japanese ancient civilizations have many things in common, and thanked for the spiritual ceremony which was dedicated to the relations and friendship between the two countries.

“I assure you, after returning to Armenia, together with our spiritual leaders we will voice a prayter for the Armenian-Japanese friendship at one of the world’s oldest churches, which is located in Holy Etchmiatsin,” Sarkissian said at the shrine.