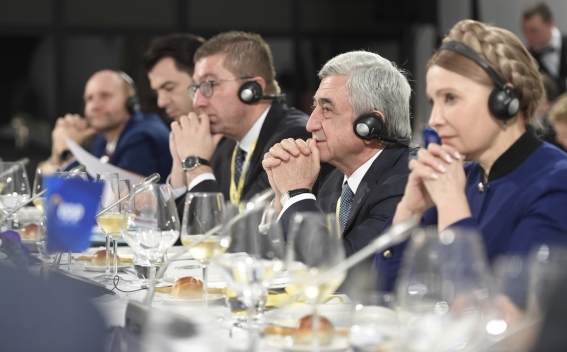 President of the Republican Party of Armenia (RPA), Third President of the Republic of Armenia Serzh Sargsyan, who is in Croatia on a working visit, yesterday participated in the European People’s Party (EPP) Summit in Zagreb, chaired by newly elected EPP President Donald Tusk.
The summit was attended by EU leadership representatives, political leaders from non-EU countries, leaders of European parties, heads of state and government representing EPP-member parties from Eastern partner countries, as well as leaders of opposition political forces.
The Summit was held in a closed working format between the partners.
On the margins of the EPP Congress and Summit, RPA President, Third President of the Republic of Armenia Serzh Sargsyan held separate contacts with a number of sister political parties, representatives of the European Parliament’s leadership and heads of state to discuss issues of mutual interest.
Հայերեն На русском